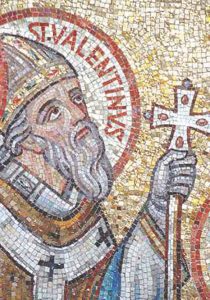 Candy, flowers, romantic dinners, and excuses for wooing are the common traditions we associate with the once-pagan holiday known as Valentine’s Day.

The question is – how did this over-commercialized holiday really begin?

There are a few stories surrounding the history of Feb. 14 and St. Valentine himself, all dating back to the Roman Empire. The 14th day of February was a day set aside to honor the goddess Juno, queen of the Roman gods and goddesses. The following day, Feb. 15, began the feast of Lupercalia – a fertility festival dedicated to Faunus, the Roman god of agriculture, as well as to the Roman founders Romulus and Remus.

As part of the festival traditions, there was a name drawing among the young people. The names of young Roman women were written on slips of paper and placed into a jar. Each young man would draw a young woman’s name from the jar, and the two would be partners for the duration of the festival. Sometimes the pairing lasted an entire year, and often, the couple would fall in love and later marry.

At the time, Emperor Claudius II was involved in many bloody and unpopular campaigns, and he was having a difficult time recruiting soldiers to join his military leagues. Claudius believed that soldiers were reluctant to join because they did not want to leave their loves or families.

With this in mind, Claudius decreed all marriages and engagements cancelled in Rome. During this time, St. Valentine was a priest in Rome, and he and St. Marius secretly married young couples. For this, St. Valentine was apprehended and dragged before the Prefect of Rome, who sentenced him to be beaten and then executed by beheading. He suffered this martyrdom on Feb. 14, around the year 270 AD.

Before his death, it is said that St. Valentine left a note for the jailer’s daughter, who had become his friend, and signed it “From Your Valentine.” Although the truth behind the St. Valentine’s legend is murky, the stories certainly emphasize his appeal as a sympathetic, heroic and, most importantly, romantic figure. It is no surprise that by the Middle Ages, Valentine was one of the most popular saints in England and France.

Over time, Feb. 14 became a time for lovers to exchange sweet messages, making St. Valentine the patron saint of lovers. The date was often commemorated with the sending of poems and simple gifts. During the Middle Ages, it was commonly believed in France and England that Feb. 14 was the beginning of the avian mating season, which added to the idea that the middle of February – Valentine’s Day – should be a day for romance.