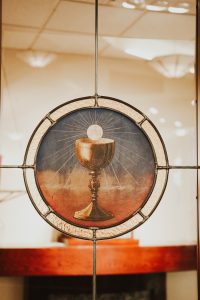 According to the late stewardship pioneer Msgr. Thomas McGread, when a pastor speaks about money during his homily, 75 percent of the congregation immediately stops listening.

Let’s face it — most of us do not like to discuss money, and many of us feel that talking about money at the pulpit is bad form.

However, did you know that tithing is mentioned in the Old Testament 39 times, and in the New Testament 11 times? Tithing is biblically based, and it simply means to give a portion of our gifts back to God.

Stewardship simply means being grateful for all of God’s blessings. Everything we have – each breath we take on earth, the tremendous talents we possess, and our ability to earn income to sustain ourselves – all stem from God. We come into the world with nothing and we leave with nothing.

Recognizing this and being grateful for our bountiful blessings is the first step of stewardship. Once these realizations fall into place, we are then eager to find a way to respond to God’s generosity and to embark upon a stewardship way of life.

And stewardship is just that, a way of life. It is not like a TV show to which you can tune in whenever the mood strikes, and shut off when you are no longer interested. It is truly a way of living.

Yet, the mere word “stewardship” has gotten a bad rap over the years — and not just by us lay people.

In 1992, when the United States Council of Catholic Bishops were forming the Pastoral Letter on Stewardship, they originally didn’t want to title it Stewardship: A Disciple’s Response.

“Instead, they wanted to just call it A Disciple’s Response, with the reason being that they felt stewardship meant money,” said Msgr. McGread before his passing in April 2013. “I convinced them at the time that ‘stewardship’ is a biblical term and it is our job to explain what a steward is. Before the Pastoral Letter, most of us didn’t understand the spiritual dimension of stewardship.”

So, how do we go about sharing the spiritual dimensions of stewardship with fellow parishioners and lay leaders?

First of all, Msgr. McGread cited the importance of being hospitable and discovering the needs of parishioners. He felt that when parishioners were welcomed and their needs were met, they were fulfilled and felt a sense of belonging to their parish. This, in turn, creates ownership. Once parishioners felt like they were part of the parish, they wanted to respond by volunteering, and sharing their time, talent and treasure in order to help make it the best parish community possible.

And, when parishioners support their parish with all of their resources out of gratitude, the entire parish blossoms. Prayers increase, ministries grow, and yes, the offertory increases. These blessings are natural outcomes of living a stewardship way of life, and they are why it is important that we should always remember the true meaning of the word “stewardship.”