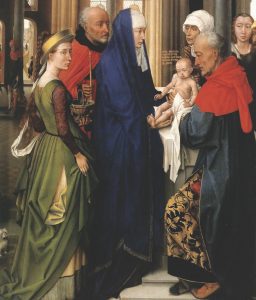 Traditionally, the Church has set aside Feb. 2 in observance of the Presentation of the Lord – or the day in which Joseph and Mary presented Jesus to the priests and elders in the Temple.

For years, this feast – which in the United States is only formally celebrated when it falls on a Sunday – marked the end of the Christmas season. In old days, the Presentation was often referred to as “Candlemas” and was celebrated by a candle-lit procession into the church, signifying Christ as the “light of nations.”

According to Jewish law, the firstborn male child belonged to God, and the parents had to “buy him back” on the 40th day after his birth, by offering a sacrifice of “a pair of turtledoves, or two young pigeons” (Luke 2:24) in the temple — thus the “presentation” of the child. On that same day, the mother would be ritually purified — thus the “purification.”

St. Mary and St. Joseph kept this law, even though, since St. Mary remained a virgin after the birth of Christ, she would not have had to go through ritual purification. In his Gospel, Luke (2:22-39) recounts the story.

Originally, the feast was celebrated on Feb. 14, the 40th day after Epiphany (Jan. 6), because Christmas wasn’t yet celebrated as its own feast, and so the Nativity, Epiphany, the Baptism of the Lord (Theophany), and the feast celebrating Christ’s first miracle at the wedding in Cana were all celebrated on the same day. By the last quarter of the fourth century, however, the Church at Rome had begun to celebrate the Nativity on Dec. 25, so the Feast of the Presentation was moved to Feb. 2, 40 days later.

When Christ was presented in the temple, “there was a man in Jerusalem named Simeon, and this man was just and devout, waiting for the consolation of Israel.” When St. Mary and St. Joseph brought Christ to the temple, Simeon embraced the Child and prayed the Canticle of Simeon: “Now thou dost dismiss thy servant, O Lord, according to thy word in peace; because my eyes have seen thy salvation, which thou hast prepared before the face of all peoples: a light to the revelation of the Gentiles, and the glory of thy people Israel” (Luke 2:29-32).

Because of the words of the canticle — “a light to the revelation of the Gentiles” — by the 11th century, the custom had developed in the West of blessing candles on the Feast of the Presentation. The candles were then lit, and a procession took place through the darkened church while the Canticle of Simeon was sung. Because of this, the feast also became known as Candlemas. While the procession and blessing of the candles is not often performed in the United States today, Candlemas is still an important feast in many European countries.

— Hold your own candlelight procession at home, teaching your children the significance of the light as a symbol of Christ.

— Ask a priest to bless the candles you hope to use at home this year.

— Read the Gospel account of the Presentation, found in the Gospel of Luke, chapter 2, verses 22 to 35.

— Pray a decade of the Rosary, focusing upon the Presentation of the Lord, the fourth Joyful Mystery.