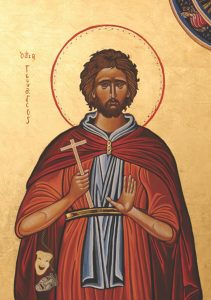 Being a performer and a comedian may sound like a fun way to make a living.

St. Genesius, an outstanding actor, playwright and comedian in late Imperial Rome, certainly did have some fun for a while. But his career and life came to an abrupt end when his work ultimately led him to Christ.

Genesius was a comedian of some renown, but in the fourth century, Christians were often discouraged from becoming actors because ancient Roman comedy was highly sexual, crude and offensive.

In the year 303, Emperor Diocletian launched what would be the last great Roman persecution against the Christian Church. So, Genesius used the persecution as an opportunity to write a comedy about Christianity. He thought it might attract the attention of the Emperor, increase his fame, and make him some money in the process.

Genesius approached leaders of the Christian community in Rome and presented himself as a catechumen seeking Baptism. He was then invited into a period of instruction in the faith, in order to learn the beliefs of the Christians. He was particularly taken by the idea of Baptism. But at the time, he had no plans to convert to the faith – it was all just a part of his plan to research new material to use for his comedy.

But a strange thing happened to Genesius as he began to work on his play, which was to be a comedy on Baptism. As Genesius began teaching the other actors about Baptism, he began to believe, and a desire to be baptized grew within his heart.

The opening night of the play was a great success, with Emperor Diocletian in attendance. But at some point during the play, the Holy Spirit touched Genesius. He was no longer acting.

“You fools, I wish to die a Christian,” Genesius said. When the other actors asked him why, he said, “All my life I have been a fugitive, and only today have I found God.”

From there, Genesius addressed Diocletian, stating that he wrote the play to mock Christians, but had been converted on the spot during the course of the play, by the power of Holy Spirit. “I now know that the Lord Jesus Christ is the true God, the Light, the Truth and the Mercy of all who have received His gift of Baptism,” Genesius said. “O great Emperor, believe in these mysteries! I will teach you, and you will know the Lord Jesus Christ is the true God.”

Diocletian was furious and stopped the play, having the troupe arrested and beaten, while Genesius was condemned to torture. Through all of his sufferings, he continued to confess that Jesus was God. When this failed to break his spirit, Diocletian ordered Genesius be beheaded. His final words were, “Our Lord Jesus Christ is God and we shall have life in His name.”

St. Genesius is the patron of comedians and actors. His feast day is Aug. 25.