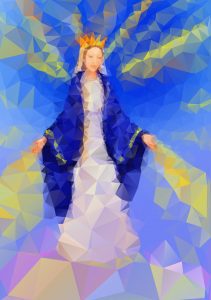 Can a pile of bones really be that exciting?

Every year, tens of thousands of pilgrims visit St. Peter’s Basilica in Rome, eager to glimpse the spot in which the alleged bones of St. Peter, our first pope, remain to this day.

The relics of saints have been venerated throughout the ages in every corner of the world – yet, the bones of the very first Christian, the Mystical Rose, are nowhere to be found.

When it comes to the day, manner or year of the Blessed Virgin Mary’s death, nothing is certain. No account is given in Scripture. The Church turns instead to Tradition for an answer.

Since the birth of the Church, no Marian relics have ever been venerated – nor can they ever be – because her body was assumed, or taken up, into heaven. There exist, therefore, no remains of the Blessed Virgin’s body on this earth. She lives, right now, body and soul, in heavenly glory.

Although the particular dogma of the Assumption cannot be found in the writings of Scripture, if we look at many other writings by the early Christians, it is clear that the Church has always held this dogma to be true. Even more, though there is no statement of fact in the Bible itself that Mary was assumed body and soul, the truths that we do know about Mary from Scripture simply serve to back up the reality that she was assumed into heaven. She gave herself wholly to the Lord and followed His will for her life, perfectly, to the end.

Therefore, it was no surprise when, in 1950, Pope Pius XII declared infallibly the Assumption of the Blessed Virgin Mary as a dogma of the Catholic faith with these words: “The Immaculate Mother of God, the ever Virgin Mary, having completed the course of her earthly life, was assumed body and soul into heavenly glory” (Munificentissimus Deus, 44).

The Assumption of the Blessed Virgin is observed on the liturgical calendar as a solemnity – of higher importance than a feast. On Aug. 15, this wonderful celebration is accompanied by great hope in the resurrection of the body and everlasting union with God in heaven.

In the words of Pope Emeritus Benedict XVI during his homily Mass on the Solemnity of the Assumption of Mary in 2006: “Mary is ‘blessed’ because – totally, in body and soul and forever – she became the Lord’s dwelling place. If this is true, Mary does not merely invite our admiration and veneration, but she guides us, shows us the way of life, shows us how we can become blessed, how to find the path of happiness.”

Alongside Catholics throughout the country, be sure to celebrate the Solemnity of the Assumption on Aug. 15. This is a declared Holy Day of Obligation in the Church and a great liturgical feast. Mark your calendars!