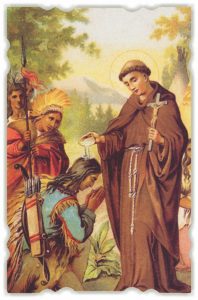 Today, St. Francis Solanus is remembered as the “Wonder Worker of the New World,” and we occupiers of a digital age might feel distanced from this fearless missionary and healer.

Yet, his story shares details of his humanity. He fostered a talent for music. He learned languages to nurture hospitality. He was close to his mother. He desired to bring Christ and be Christ for others each day.

As we look again at his narrative, St. Francis Solanus and the virtues and habits of his daily life seem clearly relevant to us today, over 400 years later.

In 1549, individuals of local nobility and renowned piety, Mateo Sanchez Solano and Anna Ximenes, welcomed their son into their home in Montilla near Cordoba, Spain. One story shares that his mother consecrated her son to St. Francis of Assisi while still in her womb.

This consecration might account for St. Francis’ proclivity to the Franciscan spirituality, for he entered the Franciscan order at Montilla and then studied in seminary at Seville. He spent the first 40 years of his life living and working locally in Andalucía, a region of Southern Spain. St. Francis first felt drawn to North Africa, desiring to achieve martyrdom there. But his vision would shift to the American missions.

During his years in Spain, St. Francis first gained the reputation of a wonderworker and healer, a reputation later fortified by hundreds of witnesses who gave testimony to his works. While many accounts exist of his tending the sick and even nursing victims of the plague, St. Francis also found time to return to his hometown and quietly care for his mother after the passing of his father.

In 1589, St. Francis sailed from Spain to the New World aboard a slave ship. Several accounts tell of the devastating hurricane this 16th century ship encountered. The storm would eventually split the ship in two! Yet, while the captain and the crew abandoned the frigate, St. Francis selflessly gave up his place in the lifeboat and stayed with the slaves to baptize and comfort them until their rescue.

Upon beginning his work in South America, St. Francis braved hitherto nearly unexplored savage regions of present day Argentina and Paraguay. When he had studied philosophy and theology in seminary, St. Francis also pursued music and now played the violin for the native people. He also diligently learned multiple challenging native languages and dialects to communicate with others in their own language.

St. Francis predicted his own death, which occurred in 1610 in Lima, Peru. In that same year, while preaching in Trujillo, Peru, he foretold the calamites that would occur in that city, which was nearly destroyed by an earthquake nine years later.

Pope Benedict XIII canonized the “Apostle of Peru and Argentina” in 1726. St. Francis’ feast is kept throughout the Franciscan Order on July 24 and in the United States on July 14. He is the Patron of Argentina, Bolivia, Chile, Paraguay, and Peru.

Our vocations might not bring us across unexplored shores, but let us endeavor to model St. Francis’ strength, selflessness and devotion to the Gospel as we pursue our own paths to sainthood in our current age.