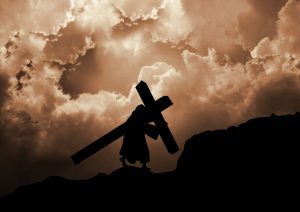 Former President and Five-Star General Dwight D. Eisenhower once said, “You don’t lead by hitting people over the head – that’s assault, not leadership.” President Eisenhower’s words are both blunt and humorous, but he makes a great point. Almost any successful endeavor in life requires the benefit of strong leadership. And a truly effective leader does not lead by simply telling others what to do, but by providing a strong example of how to carry oneself on a daily basis.

This is no different for us in our lives as Catholic Christians. As individuals who face numerous difficult choices every day, we require a leader who, through word and example, can show us the path to living according to God’s will. For us, Jesus is the supreme teacher of every aspect of Christian life, and His life as documented in the Gospels is a model that we should strive to imitate in living as good Christians. And as we have learned, stewardship – the sharing of the gifts that God has given to us – is a big part of Christian life, and one for which Jesus left many examples of successful living.

Jesus’ nature of selfless service, documented many times throughout the New Testament and culminating with His death for our sins, is an underlying aspect of living the stewardship way of life. As the United States Conference of Catholic Bishops points out in its pastoral document Stewardship: A Disciple’s Response, “In Jesus’ teaching and life self-emptying is fundamental. Now, it might seem that self-emptying has little to do with stewardship, but in Jesus’ case that is not so. His self-emptying is not sterile self-denial for its own sake; rather, in setting aside self, he is filled with the Father’s will, and he is fulfilled in just this way” (19).

Jesus points out to Peter in Mark’s Gospel that this “self-emptying” requires sacrifice, but ultimately leads to “eternal life in the age to come” (Mk 10:30). But the Christian steward’s ultimate reward is not his or her only benefit from living the stewardship way of life. By sharing of our time, talent, and treasure, and living in imitation of Christ, we can relate more closely to Him in sharing, in a small way, in His sacrifice. “To be a Christian disciple is a rewarding way of life, a way of companionship with Jesus, and the practice of stewardship as a part of it is itself a source of deep joy. Those who live this way are happy people who have found the meaning and purpose of living” (Stewardship: A Disciple’s Response, 21).

The next time you are frustrated or unsure of how to best respond to God’s gifts in stewardship, take a moment to open up the Bible. Jesus may not “hit us over the head” in His leadership, but He does provide numerous examples through His actions and teachings of how to live as one of His disciples.