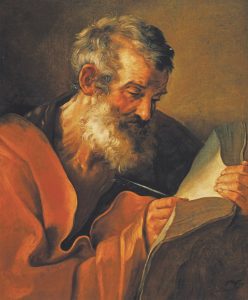 The shortest and oldest of the four Gospels, Mark draws from oral tradition and a document named Q, which contains many of Christ’s sayings. Likely written 25 to 30 years after the Ascension, Mark’s Gospel serves as a source for those of Matthew and Luke. Setting this Gospel apart from the others, women play an integral role in Mark’s Gospel, often understanding with clarity aspects of Christ’s message that the apostles had difficulty comprehending.

Furthermore, Mark portrays Christ’s persecution as a result of His radical challenge to established orders of religion, economy and politics.

While the history of Mark’s Gospel is fairly accessible, many legends have arisen around him that cause difficulty when attempting to explore this saint’s historical persona. Some associate Mark with Simon Peter after the Ascension, and others identify Mark as the young man who ran naked from the Garden of Gethsemane when Christ was arrested. Despite attempts to place Mark in Christ’s physical proximity, the most significant depictions recall his activity as a disciple in the early Church. Some scholars say that Mark was a companion of Peter’s and was the first bishop of Alexandria – thus, the first pope of the Coptic Orthodox Church of Alexandria. Mark is also said to be “John Mark” of the Acts of the Apostles, a cousin of Barnabas who accompanied Paul on his journeys. However, most do agree on Mark’s martyrdom. Tradition has it that he was dragged through the city streets due to his attempts to turn Alexandrians away from Egyptian gods.

Although Mark’s extraordinary achievements may not seem to align with the lives of the ordinary faithful, his story reminds all Christians of their responsibility to spread the Gospel message. Each believer is summoned to live a life of radical mission – one that, like Christ’s in Mark’s Gospel, defies the status quo in search of greater good and justice. By following Mark’s example, Catholics are empowered to continue their presence as a powerful political and social force, always attempting to mirror the kingdom of God on earth. We celebrate Mark’s feast day on April 25.