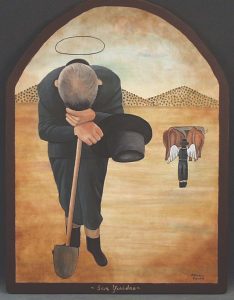 When we consider the lives of the saints, the first that usually come to mind are more than likely classed into four categories — martyrs, priests, religious and great miracle workers. St. Isidore was none of these, and yet he is revered in Spain as one of “the five saints,” which include St. Ignatius of Loyola, St. Teresa of Avila, St. Francis Xavier, and St. Philip Neri, all of whom were canonized with him in the same year. His Feast Day is May 15.

The life of St. Isidore is a great testimony to how, with God’s grace, we can take the occurrences of a simple, mundane, and even sometimes difficult life and use them as opportunities for sanctification.

Isidore was born near Madrid, around the year 1070, into a peasant family. While still a young boy, he began working as a day laborer on the farm of Juan de Vergas, a wealthy landowner, just outside of Madrid.

Despite the hard work on Vergas’ farm, where Isidore spent the rest of his life in service, he did not complain and always tried his hardest to meet the tasks requested of him. Above all things, he upheld his relationship with Jesus. As he walked behind his plough, he would talk to God, offering up his work as a prayer. He rose up extra early each day before work to attend daily Mass. He would even spend his vacations touring the different churches of Madrid and the surrounding areas.

As hardworking as Isidore was, his fellow workers complained to Vergas that the pious laborer always arrived late for work because he attended Mass every day. Isidore could not deny the accusation, but assured his employer that he always made an special effort to compensate for the extra minutes he spent in prayer. One day, Vergas decided to see for himself whether Isidore was really slacking in his work. Hiding in the bushes, he watched as Isidore came out of church, went directly to the fields, and began his plowing. To Vergas’ astonishment, he saw a “man” with another plow beside Isidore, driving a team of white oxen. When he ran toward the mysterious team, it disappeared and Isidore only looked puzzled when Vergas asked him about it. “Sir, I work alone and know of none save God to whom I look for strength,” Isidore said. No doubt, God had sent His angels to help ensure that Isidore’s work would not suffer because of his placing the spiritual above the temporal.

While working for Vergas, Isidore fell in love with and married a young woman, Maria Torribia, who shared his devotion and faith. They had one child, a son, who died while still a boy. A model of sanctity herself, Maria — also a canonized saint — served her husband faithfully all her life. Together, Isidore and Maria would look for ways to serve the poor even though they had very little themselves. One story says that when Isidore brought a number of hungry people home with him one day, Maria realized as she scraped the bottom of the pot that there was no more stew. Isidore asked her to check one more time, and she was able to spoon out enough to feed everyone. They could not refuse an act of kindness to anyone.

At times, we might be tempted to think that we do not have the talents or the assets to be good stewards. But St. Isidore shows us by his simple, humble example that we can live out the call to discipleship in the smallest actions of charity and piety — that we only need do as much as we can, and trust that God will do the rest.