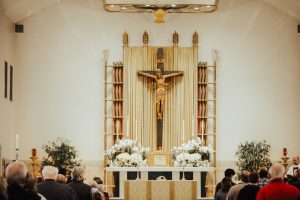 There seems to be an epidemic among Catholics in some parishes. They receive Communion and rush out the door, sometimes even before others have received the Eucharist. Some may remain, but often they, too, may depart before the final blessing, even before the celebrant priest processes out. This is an unfortunate circumstance – it is not that there is never a reason for an early departure, some sort of family emergency, a medical issue, or an unruly family member. However, assuring that you are the first out of the parking lot, being first in line at the local restaurant, seeing the kickoff of the football game, or getting to the golf course seem a bit trivial in relation to the beauty and the glory and the significance of the Mass and the Eucharist.

Rather than focus on the motivation for leaving before Mass is completed, we need to initially consider why we are even in attendance at Mass. The high point of the Mass is, or should be, the reception of the Eucharist. Jesus instituted the Sacrament of the Eucharist at the Last Supper. He held up the bread and said, “This is my body,” and then He held up the cup and said, “This is my blood.” The Catholic Mass is an awesome event for us as Catholics. Jesus Christ becomes truly present in the Eucharist. We gather at Mass to receive this gift, but we also gather in community to offer praise and worship to Him, to be spiritually fed, as well.

The Code of Canon Law makes it clear that we are to attend Mass – “On Sundays and other holy days of obligation the faithful are bound to participate in the Mass” (1247). It does not say “in part” or “in parts of the Mass.” It would seem that the expectation is that each of us as Catholics will attend a complete Mass. That, it would seem, is a sticking point with some. How often have we heard or participated in a conversation, the gist of which is, “What constitutes a complete Mass?”

There are so many considerations and perspectives about this issue. We might consider some of the counterarguments. For example, only one person left the Last Supper early – Judas Iscariot. Jesus has invited us to a banquet. Would we go to a meal with someone else, and suddenly get up and leave after we had eaten? That would seem to be a bit rude. Are we truly there to be part of our faith community? If so, should we not as a community begin and end together?

The official General Instruction of the Roman Missal pertaining to the Mass says that at the end of Mass, we are “sent to do good works, while praising and blessing the Lord” (90). Our task as Catholics does not end with Mass. Christ has called us to mission – a mission of proclaiming God’s Word and serving others. There are 168 hours in a week. Even if we consider our Sunday Mass to be a two-hour commitment, that is a mere 1.2 percent of our total week.

We cannot give God that much time and that much commitment? After the Last Supper, Jesus went to the Garden of Gethsemane to pray. He took with Him the Apostles Peter, James and John. However, when He returned to where He had left them, He found them asleep. His exact words to Peter were, “Could you not watch with me for one hour?” That is a question and a challenge evidently for some of us, as well. Are we not at Mass because we love the Lord and we care for those in our community? Or are we there for some personal and selfish reason? We reiterate that there may well be legitimate reasons for leaving a Mass before it is completed. God understands that. Nevertheless, we need to make sure that our reasoning is indeed sound and not something petty or minor. After we receive the Lord at Mass, we are, in effect, a walking tabernacle. We need to act that way.