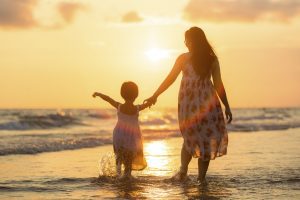 We celebrate the month of Mary during May, and during this month we also celebrate Mother’s Day. It seems fitting that we honor our mothers during May, since Mary is given to us by God as the example of true Christian motherhood.

Those who are called to be mothers have been blessed by God and called to fulfill a very important responsibility. Mothers are the vehicle through which God brings new life into this world. When we talk about Christian stewardship, we talk about sacrificially returning to God what we have been given. What can more clearly be a demonstration of complete sacrifice than the relationship between mother and child during the nine months of growth in the womb? During these nine months, the child’s life depends on the actions of the mother as the first portion of her energy and nourishment goes directly to the growing baby.

Although this relationship may change to some extent after the child is born, a mother’s sacrifice for her child is far from over after the birth. The role of the mother is critical in the child’s development – both spiritually and physically – throughout life. Mothers provide the comfort, nurture and support necessary for their children to become productive citizens and responsible Christians.

The job of a mother is not an easy one. This is a fact that Mary, the mother of Jesus, knew very well. She worried when her Son appeared to be lost at the age of 12, only to find Him later in His Father’s House. She was probably concerned as Jesus began His public ministry – not knowing what difficulties and rejections He would encounter along the way. And Mary must have experienced great anguish as she watched her Son’s body being crucified to a cross.

May all mothers look to Mary as their model for motherhood and ask her intercession as they strive to fulfill their God-given role in their children’s lives. During the month of May, let us all take some time to express our appreciation to our mothers for allowing us to come into this world, for loving us, and for serving as an example of what it means to be a steward for life.