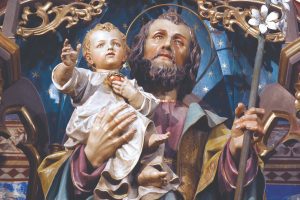 Devotion to St. Joseph began relatively late in Church history, primarily because his role of husband to Mary and head of the Holy Family was underplayed in early Christianity by many unauthenticated legends of Christ’s childhood. These legends almost always portrayed Joseph as an old man, a simple guardian of Mary and Jesus.

Modern theology places Joseph in a much more important position. Because of his valid marriage to Mary, Joseph shared in Mary’s parenthood – Joseph was a father to Jesus in every way except biological. Joseph appeared publicly as the natural father of Jesus, thus shielding the virginity of Mary and the reputation of Jesus. Joseph’s fatherly love, authority and watchful service were all necessary circumstances in God’s plan for the Incarnation.

Joseph was born in Judea or Galilee in the first century B.C. Little is stated in the Bible about the influence Joseph had on Jesus. History tells us that he brought Mary and Jesus to the temple each Passover and taught Jesus the carpentry trade. He seems to be the silent family man who shows his love for his family by providing them with security. The very safety of Mary and Jesus was guarded by Joseph when he took his family into Egypt to avoid the massacre of male babies ordered by King Herod.

In the history of the Church, Western veneration of Joseph began with the introduction of the Feast of St. Joseph in the late 15th century.

In 1870, at the end of the First Vatican Council, Pope Pius IX declared St. Joseph to be the patron of the Universal Church. He is also the patron of carpenters, workers, fathers, and a happy death given that he died in the presence of Mary and Jesus. The title of Joseph’s March 19 feast day is “Husband of Mary.” Pope Pius XII later declared May 1 to be the feast of St. Joseph the Worker, to counteract the Communist May Day holiday.

A traditional prayer to St. Joseph

O Blessed St. Joseph, faithful guardian and protector of virgins, to whom God entrusted Jesus and Mary, I implore you by the love which you did bear them, to preserve me from every defilement of soul and body, that I may always serve them in holiness and purity of love. Amen.