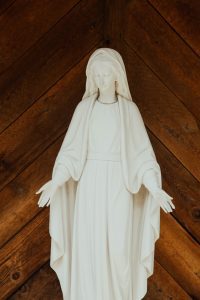 When it comes to Catholic trivia, there is one simple question that often evokes an incorrect response: “What is the Immaculate Conception?”

More often than not, this term is believed to designate Christ’s conception within Mary, through the power of the Holy Spirit. A good guess, no doubt. But it is 100 percent incorrect!

The term “Immaculate Conception” describes the state of Mary’s soul within the womb of her mother, St. Anne. It has nothing to do with a special type of generative conception by her parents – Mary’s body was formed in the usual manner by her mother and father.

Instead, the term “Immaculate Conception” describes how Mary was preserved from the stain of original sin from the first moment of her existence.

Every person since Adam and Eve has been born with the stain of original sin, which can be washed away in the cleansing waters of Baptism. Yet, this fallen state never touched the soul of Mary, the new Eve. She was conceived with original sanctity and innocence, escaping all faults, depraved emotions and passions, and remained sinless. She was not exempt from the temporal penalties of Adam, however — including sorrow, physical illness and death.

The belief in Mary’s Immaculate Conception has been held by the Church throughout history, though only officially declared a dogma in 1854 by Pope Pius IX. Highly devoted to the Blessed Virgin, Pius IX hoped the official definition would draw emphasis to the already existing belief, thereby inspiring deeper devotion to Mary. This dogma finds its roots in both Scripture and Tradition, and remains consistent with reason and the teachings of our early Church fathers.

The Solemnity of the Immaculate Conception is celebrated every year on Dec. 8 and is one of the few declared Holy Days of Obligation on the Church calendar. All Catholics are obligated to attend Mass on this day.

Why not make this liturgical feast a special day of devotion? Bring a rose to place before an image of the Blessed Virgin in the church sanctuary, or arrange a little altar at home for your children to decorate. Recite the Magnificat and discuss the Church’s teaching on the Immaculate Conception.

Once this beautiful feast is brought alive in our hearts and in our homes, we will never again mistakenly answer that “tricky” question: “What is the Immaculate Conception?”