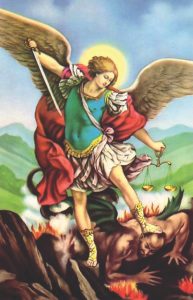 Every Sept. 29, the Church celebrates the feast day of the Archangels — St. Michael, St. Gabriel and St. Raphael. We are blessed to be inspired by these “servants and messengers of God” (Catechism of the Catholic Church, 329).

The term “archangels” has its Scriptural basis in the New Testament (1 Thes 4:16, Jude 1:9), indicating a chief or leading angel. “Archangel” generally refers to St. Michael, St. Gabriel and St. Raphael, as they are the three angels most frequently mentioned throughout Sacred Scripture and Sacred Tradition. The fact that these three angels are mentioned by name on multiple occasions indicates the significance of their roles in the history of salvation. It is because of these important roles that we take pause to celebrate on Sept. 29.

St. Michael is mentioned by name on several occasions in Sacred Scripture (Dn 10:13, Rev 12:7), and his role in the Tradition of the Church has been extensively documented. He has been widely referred to as the “great prince,” and is most often associated with the apocalypse — the final battle against Satan. Christian Tradition gives St. Michael four different roles, but he has primarily been regarded as the patron and protector of the Church.

St. Gabriel is mentioned by name in Scripture (Lk 1:19), and Tradition has also assigned him implicit roles within Scripture where he is not specifically mentioned. Most important, however, is St. Gabriel’s role as the messenger of God, delivering to Mary the announcement of the birth of Our Savior (Lk 1:26).

St. Raphael is mentioned by name only in the Book of Tobit, where he is responsible for healing Tobias. Raphael means “God has healed” and thus, he has also often been associated with the “angel of the Lord” (Jn 5:4).

The feast day on Sept. 29 gives each of us the opportunity to consider our own role in the Church, as we gratefully commemorate the Archangels responsible for carrying out their roles of defender, messenger and healer.