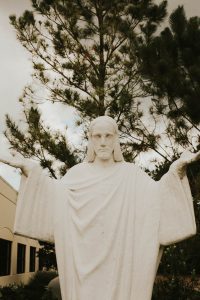 Sheep are mentioned more times in the Bible than any other animal. In fact, more than 500 references are made to sheep. It naturally follows that shepherds are an important aspect of the Bible, as well. The first shepherd is found in Genesis; “Abel became a herder of flocks” (Genesis 4:2). Shepherds continue to play a dominant role throughout Scripture. We all are familiar with the beautiful Psalm 23, composed by David (a shepherd himself): “The Lord is my shepherd; I shall not want.”

Many other familiar Biblical figures served as shepherds, including Abraham, Jacob and Moses. However, the ultimate spiritual shepherd was, of course, Jesus Himself. “I am the good shepherd; I know my own and my own know me, just as the Father knows me and I know the Father; and I lay down my life for my sheep” (John 10:14-15). If we are familiar with the story of Jesus’ birth, we are also aware of the important role played by shepherds in and near Bethlehem.

We need to know that being a shepherd, a sheep farmer, was not considered to be one of the more noble professions – shepherds were looked down upon by many. Near Bethlehem, it may well have been that the sheep they were raising were to be used as sacrifice animals. Yet, God chose a special role for them at Jesus’ nativity. The shepherds were visited by an angel who announced to them, “I bring you good news of great joy…a Savior has been born to you; he is Christ the Lord” (Luke 2:10-11). The word “angel” in both its original Greek and Latin means “messenger.” Throughout Scripture, angels serve as messengers. However, in recounting the angel with the shepherds, something occurs which is unique – the initial angel was joined by a “heavenly host” of angels, proclaiming “Glory to God in the highest heaven, and on earth peace for those he favors” (Luke 2:14).

The shepherds, of course, rush to Bethlehem to find the Christ Child. When they had seen the Savior, they told others, many others most likely, what they had seen and what they experienced. The shepherds in effect became the new messengers of the Good News.

Shepherds were good stewards. Being a shepherd meant feeding the lambs and sheep; bringing them to good pasture lands and water; caring for them; delivering new lambs; leading them and teaching them to stay together; going after those wandering and lost; and protecting them. Jesus was indeed our Good Shepherd.

However, He calls us to be shepherds, as well – and Advent and Christmas are good times for us to pursue and live out that call. We need to be shepherds. We need to seek out those who are lost. We need to love and care for them. We need to lead them to faith and to the Church. This is the time. Be a shepherd yourself this season. Proclaim the Good News!