Today’s First Reading from the First Book of Kings, as well as the Gospel passage from Mark, both center on the actions of two poor widows. The Gospel passage is often called the story of the “Widow’s Mite.” But taken together, perhaps a more fitting title of the stories of these two ladies would be, “The Mighty Widows.” 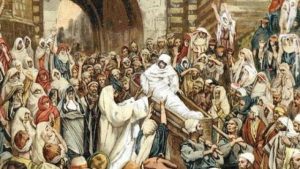 In our First Reading, the prophet Elijah encounters a widow during a terrible famine. She is preparing to make one last meal for herself and her son before their supply of food runs out. Elijah, acting as God’s messenger, tells her not to be afraid and asks her to give him something to eat before preparing a meal for herself and her son. In an extraordinary act of trust — and heroic hospitality — she agrees to Elijah’s request! Again speaking as God’s own messenger, Elijah assures her of God’s special provision for her, telling her that her “jar of flour shall not go empty, nor the jug of oil run dry, until the day when the Lord sends rain upon the earth.” Sure enough, the widow and her son were able to eat for a year, just as God promised.

In the Gospel, Jesus observes the crowd as they make their offerings to the synagogue treasury. He sees the wealthy people putting in large sums, while a poor widow contributes only two small coins. Seizing on this teachable moment, Jesus calls His disciples to Himself and tells them that according to Hiscalculations, it is the widow who has made the most pleasing offering. Unlike the rich, who gave a portion of their surplus, the widow gave all she had, “her whole livelihood.”

In the eyes of the world, particularly in Biblical times where there was no life insurance or Social Security, these widows were weak and dependent on others to take care of them. They each found themselves in desperate situations — one in the midst of famine with a child to care for, and the other clearly impoverished. Yet each demonstrated strength and generosity that distinguished them from those around them. From where did this strength come?

It came from knowing who they are, andWhosethey are. These women must have known that their security would not come from a good life insurance policy or connections to someone with a hidden storehouse of flour.

No, their security came from knowing they were daughters of the Most High God and from putting their faith in Him. They had no need to panic in the midst of natural disaster or cling desperately to their menial resources. Their faith in God set them free to trust Him when all seemed hopeless. Their faith kept them detached from material possessions. Their faith allowed them to be brave and generous, to think of others despite their own trials.

These women saw themselves as stewards, not owners, of the resources God gave them, regardless of how much or how little they had. And acting as stewards made them gracious, generous and mighty indeed.