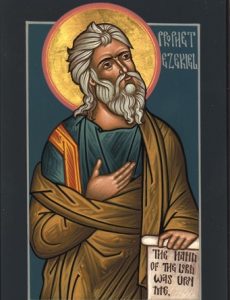 The last verse in today’s Gospel says of Jesus, “He was amazed at their lack of faith,” in reference to the reaction and response He received from his own neighbors when He returned and preached at the synagogue. Might the Lord say the same about us? Might he be equally surprised at the lack of faith we sometimes show? Faith is based upon trust, and that trust is at the core of the readings on this Fourteenth Sunday in Ordinary Time.

In the reading from the Prophet Ezekiel, our First Reading, God addresses Ezekiel in this way: “Son of man, I am sending you to the Israelites.” It is somewhat surprising, but God calls Ezekiel the “son of man” 93 separate times in this Book. Why? It would seem that Ezekiel is truly a man among men, and he seems to represent all of humankind. Of course, the phrase “Son of man” is what Jesus was most likely to call Himself at least 80 times in the Gospels. Jesus wanted us to know that He was one of us.

God makes it clear to Ezekiel that He, the Lord, will provide Ezekiel the strength to accomplish what He is calling him to do, in spite of the challenges it presents. In the same way if God has called us to do something, He will give us the strength to do it. That is what trust really is. We understand that we cannot of our own strength and abilities accomplish what God may want us to. To trust God is to have faith in Him.

After Jesus Himself and His Blessed Mother Mary, perhaps no one in Holy Scripture trusted God any more than St. Paul. Today’s Second Reading from the Second Letter of Paul to the Corinthians contains Paul’s perspective of that. He mentions that “a thorn in the flesh was given to me…to keep me from being too elated.” He is referencing the burdens he feels he must bear. When we think of a thorn, we think of something small that might cause minor pain and a minor inconvenience. It is worth knowing that the word translated as “thorn”— skolops — can also be translated as a “tent stake,” more of a spike than a small thorn. Nevertheless, regardless the translation it is something that frustrates and troubles Paul.

Paul also knew, just as Ezekiel found in the First Reading, that when God calls you to do something He provides you the power to do it. Paul knew that he could not do what he felt he was called to do without assistance from the Holy Spirit. Paul also states in the reading, “I will rather boast most gladly of my weaknesses in order that the power of Christ may dwell in me. I am content with weaknesses…for the sake of Christ; for when I am weak, then I am strong.” Paul understood that the “grace” he received from God would be sufficient to meet Paul’s every need. Perhaps each of us must accept his or her weaknesses in order to be stronger in faith.

When Jesus says in today’s Gospel from the Book of Mark, “A prophet is not without honor except in his native place and among his own kin and in his own house,” He is expressing another one of those passages from Scripture that has become very well known. Jesus understood, as did both Ezekiel and Paul in the first two readings, that rejection is a price that those who believe must sometimes pay. It hurt Him for sure to be rejected by people He considered friends and people who were His neighbors.

One limitation that we all face is a sense of doubt and even mistrust by some of those who are close to us. As indicated in the opening, Jesus also expresses amazement at the unbelief of those close to Him. That is a limitation and a frustration we all sometimes face. The question is, “Where is our belief?” and “Where is our trust in God?” Jesus never seemed to be amazed at what He saw in terms of the wonders of creation. What amazed Him was the lack of faith among people. In spite of the rejection He experienced, He did not hesitate to continue what He felt His ministry was. We need to have that same determination, knowing full well that God is with us always.