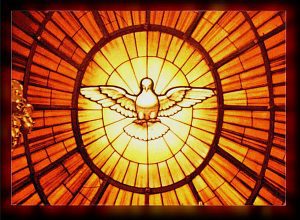 For us as Catholics Easter is the greatest feast in the Church; it is followed by Christmas. However, today, Pentecost Sunday is not far behind in terms of its importance. Today marks the descent of the Holy Spirit on the Apostles and other followers of the Lord, and thus it is often called the birthday of the Church.

It was on this day, Pentecost, that Jesus fully united with His followers through the Holy Spirit. This is a great day of joy for us as it was on this day that Christ fulfilled His promise to us. The Catechism of the Catholic Church (#732) points out, “On that day (Pentecost), the Holy Trinity is fully revealed. Since that day, the Kingdom announced by Christ has been open to those who believe in him: in the humility of the flesh and in faith, they already share in the communion of the Holy Trinity.”

In a sense today is a day of the Holy Spirit. Our First Reading from the Acts of the Apostles reports, “Then there appeared to them tongues of fire, which parted and came to rest on each one of them. And they were filled with the Holy Spirit and began to speak in different tongues, as the Spirit enabled them to proclaim.” Often you may see a painting or other rendering of the Apostles with a flame above their heads. That image comes from the descent of the Holy Spirit as described in this reading.

Pentecost had another name in the time of Jesus. It was also called “the day of the first fruits.” Occurring 50 days after the Passover, the people would bring the first fruits of the wheat harvest to present them to God. Although wheat was at the center, it was not necessarily the only gifts presented to God to acknowledge His gifts. Barley, grapes, figs, pomegranates, olives, and honey were also brought. The people believed that not just the first, but also the best of the crop should be given to God.

This is, of course, one of the basic tenets of our idea of stewardship — that is, presenting our gifts to God in thanksgiving for God’s many gifts to us. We no longer live in an agrarian society. Many people make their living in non-agricultural ways. But for those who do, this practice, especially among Christians, is still followed. In the potato raising area of Columbia, harvesting the potatoes is a prime event. Everything shuts down as entire families go through the potato fields and harvest the potatoes, but it is also still a tradition that they do not harvest every tenth row.

When the harvest is complete, the people of the local churches return and pick that tenth row as a gift to the Church and thus to God. Do we give of our own first fruits? Do we fully understand and appreciate the many blessings God gives to us?

St. Paul expands on this idea in the Second Reading from his First Letter to the Corinthians. The idea of stewardship is also quite definite here when Paul writes, “There are different kinds of spiritual gifts but the same Spirit;

This tells us clearly that stewardship involves more than just material goods. We are all part of the Body of Christ, and our particular talents and gifts are necessary for the Body to fully function. We are called to serve God and one another and whatever our gifts may be, they are to be shared with others, especially those in our own faith community. Do you feel that your presence at church is your gift or do you understand that you may need to do more?

The Gospel from St. John tells of Christ visiting His Apostles after His Resurrection. This meeting happened on Easter Sunday, and it is part of the preliminary to what we celebrate today. After rising from the dead, Jesus could have gone anywhere, and He could have done anything, but He wanted to be with His people. He wants to be with us in the same way.

“As the Father has sent me, so I send you,” says the Lord on that occasion. He gives us a mission; He commissions for us to do what He did. Now, just as then, the Lord sends us out in the world, our world, where we live, where we work, wherever we go, to represent Him and to model Him as best we can.

St. Teresa of Calcutta, Mother Teresa, had a real awareness of what it meant to be sent by God. She said, “I am a little pencil in the hand of a writing God, Who is sending a love letter to the world. Do we also grasp what it means to share that love with all around us? We have been gifted with the Holy Spirit to assist us.