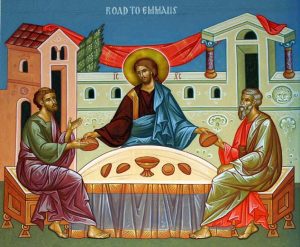 The First Reading on this Third Sunday of Easter is from the Acts of the Acts of the Apostles. We hear a lot from St. Peter in the Acts, and it is clear that he felt his main evangelizing role was to tell people the story of Jesus, especially about His resurrection and what that means for each of us. Although Peter is evidently speaking to a Jewish audience, and he makes a point of reminding them that they were part of the crucifixion, Peter is also reminding us that we, too, share in some part in that condemnation and death. Peter of all people is familiar with that because of his own denial of the Lord.

Yet, Peter makes it clear that we are forgiven, but it is a forgiveness we must actively seek. God grants mercy to us regardless, but we are prompted to “Repent, therefore, and be converted, that your sins may be wiped away.” We should understand the importance of repentance, but notice that Peter also mentions conversion. Conversion is significant in being able to serve as a disciple of the Lord and to practice stewardship as a way of life.

Normally our First Reading comes from the Old Testament, but during the Easter season it is dominated often by a reading from Acts, followed by a Second Reading from the letters of Paul or John or others, which is the norm throughout the year. Our Second Reading today is from First John. Like St. Peter we are told again that “…we have an Advocate with the Father, (Who is) Jesus Christ the righteous one.” There is an old hymn titled “What a Friend We Have in Jesus,” and that is in part what this concerns.

One might say as our Advocate Jesus Himself is our defense lawyer. Imagine standing in judgment before the Lord. Keep in mind that God is not shocked by sin; He has more or less seen it all. God’s forgiveness is always available. Jesus speaks in our behalf. He might say something like “He (or she) is completely guilty. However, he (or she) has made a complete confession to You.” Have we made that confession; have we done it in the way that we should? As St. Peter indicated in the First Reading, forgiveness is available to us, and our sins are “wiped away,” but it is up to us to seek that forgiveness. That is what Easter is all about — repentance, forgiveness, and redemption by our Lord and Savior.

The Gospel that is, as mentioned previously, the story of the two disciples walking to Emmaus who are joined en route by the risen Jesus. When the Lord first joins them, they do not recognize Him. As Biblical scholars have examined this story (which is also reported in Matthew though Emmaus is never mentioned in that passage), many have concluded that the reason Jesus was not recognized is because they were not firmly convinced that He had risen from the dead. This was the darkest of times for Jesus’ followers. Many had probably witnessed the crucifixion, perhaps even these two men. Their hopes for Jesus were in part destroyed by His death. They may well have concluded that Jesus was gone.

However, there are key aspects of this journey that revealed to them both the resurrection of the Lord and the absolute reality of His return. One of the more significant parts of the story is when the Lord says, “Have you anything to eat?” A ghost or spirit does not require food. Jesus was real, and in most of His resurrection appearances He dines with the disciples; we need to also understand that Jesus is real. This was the same and real Jesus doing something with them He had done many times before.

By the end of this confrontation, the attitudes of the two men had changed completely as they moved from a dark time to a time of light. This is a good thing for us to recall in our own darkest moments, when we may doubt and despair. Jesus walks with us as a friend always on our own journeys. He is ever ready to listen to our sorrows and our doubts. If we recognize His presence, we can experience the same healing and joy that the two men walking to Emmaus did.