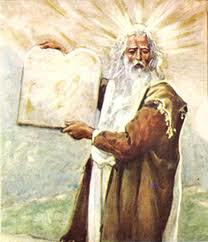 The Ten Commandments are also called the “Decalogue,” which means literally “ten words.” According to the Catechism of the Catholic Church (#2056) “God revealed these ‘ten words’ to His people on the holy mountain. They were written ‘with the finger of God.’ They are pre-eminently the words of God”

At another point the Catechism fortifies the Commandments by saying, “…from generation to generation…the ‘deposit’ of moral teaching has been handed on. Along with the Creed and the Our Father, the basis for catechesis has traditionally been the Decalogue, which sets out the principles of moral life valid for all people.” (#2033)

The Commandments are considered essential for spiritual good health and growth. They serve as the basis for Catholic social justice. A review of the Ten Commandments is a common type of examination of conscience before receiving the sacrament of Penance.

As Lent draws to a close, it is important for each of us to go to confession and receive the sacrament of Penance. As part of that we may wish to look at our lives and how we live them through the holy words of the Ten Commandments.