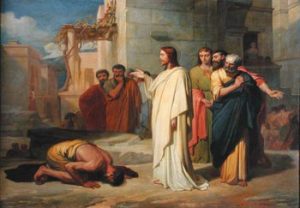 Lent begins for us Catholics on Feb. 14. Lent is a special time of prayer, penance, sacrifice and good works in preparation of the celebration of Easter. In the desire to renew the liturgical practices of the Church, The Constitution on the Sacred Liturgy of Vatican Council II stated, “The two elements which are especially characteristic of Lent — the recalling of baptism or the preparation for it, and penance — should be given greater emphasis in the liturgy and in liturgical catechesis. It is by means of them that the Church prepares the faithful for the celebration of Easter, while they hear God’s word more frequently and devote more time to prayer” (no. 109). The word Lent itself is derived from the Anglo-Saxon words lencten, meaning “Spring,” and lenctentid, which literally means not only “Springtide” but also was the word for “March,” the month in which the majority of Lent falls.

Our readings on this Sixth Sunday in Ordinary Time more or less serve as an introduction and preparation for Lent. Our First Reading from the Old Testament Book of Leviticus has explanations of and references to leprosy. Leprosy is a disease we may know about and may hear about, but it is largely unknown to us. Because of modern drugs and treatments, leprosy is almost unknown in the western world – the United States’ last two leper colonies have been shut down for many years now. But worldwide there are some 15 million lepers, almost all of them in third-world nations.

But Jesus was different. He loved lepers; He touched them and healed them when they had no hope at all. We are called to treat people in a similar way. That is part of what Lent is all about, getting us to alter our lives so that we are willing to love others, regardless the circumstances.

In the opening verses of the Second Reading from St. Paul’s First Letter to the Corinthians, he declares, “…whatever you do, do everything for the glory of God.” That is another way of saying that God should be at the center of our lives, and literally everything that we do should never lose that focus. Again, as we enter into Lent this week, the idea is not to do the minimum, not to barely fulfill what we are to be and what we are to do to be Disciples of Christ, but to go beyond and truly glorify God.

The Lord was always at the center of Paul’s life, but he also makes it clear that his motivation had nothing to with seeking profit or reward or glory for himself. Paul’s greatest desire for others was that they be saved; that was the true concentration of everything he did or tried to do.

Paul fully understood that he was an example. More important, he knew that he was not the worthy example, but it was Paul, the follower of Christ, who was the example. If we did nothing else during Lent but strive to show others what it means to believe in and to follow Christ, Lent would be successful for us.

Leprosy, which is addressed in the First Reading as well as our Gospel from St. Mark, has largely, as mentioned, been eradicated in the world we live in. As terrible as the physical suffering of having leprosy was, the worst part may have been the way lepers were treated. Throughout Jesus’ ministry, we hear and experience situations where the Lord reaches out to someone, probably to the horror of His followers and His Apostles.

This does not mean that we have to spend our lives, as St. Teresa of Calcutta (Mother Teresa) did. Her service to others and that of her sisters is well known. In today’s Gospel Jesus sees God in the leper who approaches Him. One of Mother Teresa’s famous quotes was, “I see Jesus in every human being. I say to myself this is hungry Jesus; I must feed him. This is sick Jesus. This one has leprosy or gangrene; I must wash him and tend to him. I serve because I love Jesus.” It is easy to establish guidelines for ourselves during Lent: Love like Jesus. Act like Jesus. Be Christian examples to others. Pray like Jesus. Find Jesus in all around us, and treat them accordingly.