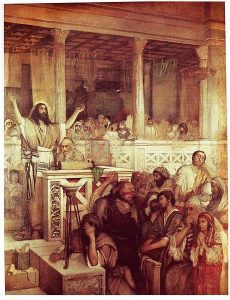 In today’s Gospel Reading from St. Mark, it is reported that Jesus went to the synagogue and began to teach, but His teaching was somewhat different from that normally heard there “for he taught with authority and not as the scribes.” Often those who taught in Jesus’ time (the scribes) simply quoted others, a variety of Rabbis.

However, Jesus taught with authority because He had authority. Jesus’ divine message was not quoting other humans, but quoting God. Jesus was One with God so He knew what He was talking about. Jesus taught with authority because He believed what He was teaching. He was familiar with the information which allowed Him to teach boldly. People listening could perceive that this was someone Who knew.

Up until this time we have seen the Lord as the Son of Man Who submitted to His Father. He submitted to God in His Baptism, and to the Holy Spirit in the wilderness. To have authority also requires submission. We, too, are called to submit to God, but for us that is sometimes challenging because it requires humility, something that is not easy for many of us.

Later in the Gospel of John there is another account of the Lord teaching at the Temple. He is challenged, and His response is quite simply, “My teaching is not from myself; it comes from the one who sent me.” We are not divine, but we, too, are sent.