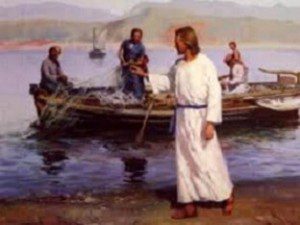 We are called to that same process. It is not as if it happens quite suddenly. It happens over time, and it is a progression. If we are to be “fishers of men,” we are to be evangelizers and disciples of the Lord, and we are to represent what it means to be part of the Kingdom of God.

Of course, Simon and Andrew “abandoned their nets and followed him.” It may be more difficult for us to “abandon our nets” so to speak, but it does prompt us that we need to make major changes in our lives if we are going to follow Jesus. Simon and Andrew, and then James and John, were common men, normal people. They had no theological credentials nor did they have any special status in the world.

Most of us are similar. Jesus did not select them (or us) for who they were. He called them for what He could do through them. It is the same with each of us. Yes, we are called, but in order to really fulfill our calling we need to follow and trust in Jesus.