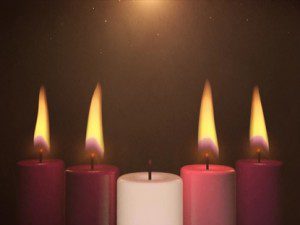 How would you feel and react if an angel suddenly appeared to you? When the angel Gabriel appears to our Blessed Mother Mary, one of the first things he says is “Do not be afraid.” Mary’s reaction is that she is neither surprised nor fearful, but then we already know that Mary was not the average person. And finally she surrenders herself to God’s divine plan, something each of us needs to do also.

Our readings on this final Sunday of Advent remind us that we need to imitate Mary, to be open to God’s work in our lives, and to have a place for Christ in our hearts. On this final Sunday of Advent the First Reading is from the Second Book of Samuel. Because of the detail in many readings, we may become distracted from what is the basic message, or at least one of many basic messages. This reading is about King David and his desire to build a temple for God.

The key fact here though is that David is examining his own heart with one question, “What can I do for God?” David is filled with gratitude and concern for God’s glory, and he wishes to do something exceptional for the Lord. That is a question we need to ask ourselves. This is a time when we must concentrate on how we can best serve God. Advent is coming to a close, and if we have done nothing else during this holy season of preparation, we need to find ways to serve and to help build the Kingdom of God. Like our Blessed Mother it is essential we commit to doing God’s work here and now.

The Second Reading is the conclusion, the final verses, of St. Paul’s Letter to the Romans. In a sense it is a hymn of praise, the kind of praise we should be reflecting in the final hours of Advent. The closing is simply, “…to the only wise God, through Jesus Christ be glory forever and ever. Amen.” Throughout his letter to the Romans Paul makes it clear that his purpose in writing it is to let those “called by Jesus Christ” understand what gifts they have received from the Lord spiritually. As a preface to his closing statement quoted above Paul writes, “…to bring about the obedience of faith.” Just as we should be asking how we can serve God, we also need to consider how we can obey God.

The entire letter to the Romans is a casing for the Gospel of our Lord Jesus Christ: His purpose, His work, and His glory. That is where we are in relation to Advent. Christmas is upon us, and as we celebrate the coming of Christ, we need to prepare to take the next step in our journey by committing ourselves to being His disciple, not just at this time of year, but throughout our lives. One of the reasons St. Paul’s letters are so powerful is that he is always reflecting on the wisdom of God’s plan, and he reminds us regularly that God’s wisdom is beyond us. His plan may not be ours; in fact it cannot be ours. Let us join with Paul in praising God and accepting the glory of His plan, of which Christmas is such an important part.

The Gospel Reading from St. Luke is so appropriate for this day, as it reminds us of St. Mary’s conception and acceptance of God’s will. The name “Mary” itself is indicative of her role. “Mary” is the Greek form of the Hebrew name Miriam, and it means, “exalted one.” We are familiar with the term Jesus of Nazareth. Nevertheless, chronologically this is the absolute first mention of Nazareth in the Old or New Testaments. Perhaps the reason we have never heard “Nazareth” before (it never appears in the Old Testament) is to emphasize how unremarkable it is or was. Yet what occurred there is incredibly remarkable.

A number of facts are made clear in this reading: First, Mary is clearly a “virgin.” There is no ambiguity about that: “The angel Gabriel was sent from God to a town in Galilee called Nazareth, to a virgin betrothed to a man named Joseph.” What’s more, there were three stages to a Jewish wedding at that time. The first was engagement, a formal agreement made by the fathers of the bride and groom; the second was betrothal, a ceremony where mutual promises were made. At this time Mary and Joseph were “betrothed,” but not formally married; and the third was the marriage that normally occurred about one year after the betrothal.

Mary’s acquiescence and acceptance of her role is such a great example of trust in God. Mary saw her role as fulfilling the purpose of God. That reflects what we have heard in the first two readings: we are called, and that calling should be the basic purpose of our lives. There are similarities between God’s work in Mary and His work in us. Like Mary, we should do everything we can to fulfill God’s Word.