November 26, 2017 —The Solemnity of Our Lord Jesus Christ, King of the Universe 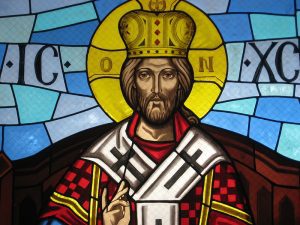 We celebrate today what is popularly and traditionally called the Feast of Christ the King. This is also the beginning of the last week of our Catholic Liturgical Year, as the New Year begins with Advent next Sunday. We often mention that time is a gift to us; this idea of measuring Church time is also a gift, but do we truly appreciate it?

People tend to say “I go to church.” In reality, Christ does not call us to “go” to church; He calls us to be Church. We should live our lives in such a way that it is clear we are Catholic and Christian and part of Christ’s Kingdom, for He is our King. Were you aware that the name “Christ” is a royal title in itself? In Greek it means “the anointed king.”

St. Paul referred to the Lord as “king of kings and lord of lords,” a phrase with which we are familiar. If we accept Christ as our King, and if we live our lives as His disciples and followers we are certainly part of His Kingdom. Pope Pius XI instituted today’s solemnity in 1925 at a time when many countries were struggling with total loyalty to secular royalty. Pius XI wanted Catholics to recognize that their loyalty was to a higher power, their spiritual king in heaven.

Pius XI wrote at that time, “For Jesus Christ reigns over the minds of individuals by His teachings, in their hearts by His love, in each one’s life by the living according to His law and the imitating of His example.”