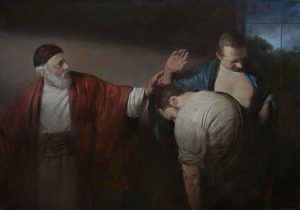 Today’s Gospel comes to us from Matthew, Chapter 21. As we hear the Word of the Lord in segments, which is the nature of our readings, it is sometimes good to know what may have occurred just prior to this moment. Chapter 21 opens with Jesus’ triumphal entry into Jerusalem on the way to His Crucifixion. This particular Gospel is part of His response to the Pharisees who challenge Jesus’ right and authority to teach.

The first two readings on this Twenty-sixth Sunday in Ordinary Time are tied to conversion. The Gospel might refer to the action required after that conversion. The First Reading is from the Old Testament Book of Ezekiel. As mentioned previously Ezekiel was a contemporary of Jeremiah. Both lived during the time of the fall of Jerusalem, and both were among those who were exiled to Babylon. One of Ezekiel’s most common themes was that of the conversion of Israel.

Ezekiel’s point was that conversion had to occur for Israel for the people to be saved and to fulfill their promise. That is true of all of us. We often say that conversion is an important part of becoming a good steward, but it is also an ongoing reality for us as Catholic and Christians. Ezekiel is speaking metaphorically about Israel in today’s reading when he states, “But if he turns from the wickedness he has committed, he does what is right and just, he shall preserve his life.” Being a steward may not seem like a matter of life and death to us. However, it is the kind of life to which Christ calls us. The Lord, like Ezekiel, often talks about true life and what it means. It involves discipleship and being alert to God’s call to us.

In his Letter to the Philippians, our Second Reading, St. Paul advises us, “Have in you the same attitude that is also in Christ Jesus.” Paul goes on to day, speaking of the Lord, “…he humbled himself.” To really embrace humility and to truly put others ahead of ourselves certainly requires conversion on our part. If anyone understood conversion, it was Paul whose own conversion story and experience are well known.

Basically in this passage Paul is explaining to the Philippians how they need to live, and especially how they need to relate to one another. When Paul tells us, “…complete my joy, by being of the same mind, with the same love, united in heart, thinking of one thing,” he is really speaking of something we may share called “fellowship.” In ancient Greek the word for fellowship is kononia. That means sharing things in common, and Paul wants us to appreciate that we share life with the Spirit of God. It is the Holy Spirit who guides and moves our lives in a powerful and precious way. To fully embrace this spirit also requires conversion of mind and heart for us.

Our Gospel Reading from Matthew is popularly called the Parable of the Two Sons. The basic story is of a man with two sons who told them to go work in the vineyard. The first son refused, but later obeyed and went. The second son initially expressed obedience, but actually disobeyed and refused to work in the vineyard. The son who ultimately did the will of his father was the first son because he eventually obeyed. The point of this parable is what matters is living for God, not lip service to that life. The religious leaders to whom Jesus was speaking were good at talking a righteous walk, but their stubbornly unrepentant hearts show that repentant sinners will enter the kingdom before them.

The father is God. The first son, who flatly refuses to work in the vineyard, represents the weak and foolish of this world. The second son, who promises to work yet never shows up, represents hypocrites, those who appear or profess one way but act another. The work the father asks them to do corresponds to living God’s way of life. In the parable both sons hear and respond verbally to their father’s command, one negatively, one positively. The one who promises to obey but never follows through is just as guilty as if he had refused from the first. Though his promise to work may make him look good on the surface, his father will never accept his act of disobedience.

We need to ask ourselves, “Where are we in our commitment to God, in our promise of discipleship?” The warning to us is not to be a son who promises to work, then neglects to keep his word. God has called us, and we have accepted that calling, promising we would work. Now we must perform what we have promised. This may require conversion, but it most certainly requires commitment and persistence.