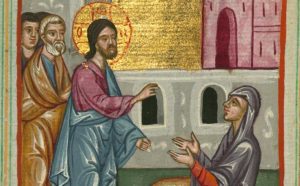 There is much in today’s readings referring to Gentiles. The term Gentile is one with which most of us are familiar. It is an English translation of the Hebrew word goyim (“people, nations”) and the Greek word ethne (“nations, people groups, people”). The Latin Vulgate translated these words as gentilis, and this word was then carried over into English as “Gentile.” Basically, the term refers to a person who is not a Jew. Almost all of us, probably all of us, are Gentiles.

From the Jewish perspective, Gentiles were often seen as pagans who did not know the true God. During Jesus’ time, many Jews took such pride in their cultural and religious heritage that they considered Gentiles “unclean,” calling them “dogs.” Gentiles and the half-Gentile Samaritans were viewed as enemies to be shunned.

Jesus brought something unique and new to the Church — the idea that it was open to all, that He offered salvation to all people everywhere.

As a prophet Isaiah, although he lived six centuries before the birth of Christ, anticipated and predicted much of what occurred and what we know about Jesus the Savior and Messiah. Isaiah makes it quite clear that all belong to Christ. He calls on us to accept the promise received from God. Simply put, at least according to Isaiah, if God says you belong, you belong.

Isaiah states in today’s First Reading, “…for my house shall be called a house of prayer for all peoples.” Jesus understood this so well and practiced it and communicated it. Most of us recall Jesus driving out the money changers from the temple. However, He did not expel them from the temple itself because that is not where He found them. Gentiles were forbidden from entering the temple, and they would gather on the outer courts to pray. This is where Jesus found the money changers. You might say He was doubly upset; part of His concern was also the fact the Gentiles were not allowed to enter the temple, thus in part creating the situation.

The Gospel from St. Matthew speaks of Jesus ministering to a Gentile woman. You may be aware that our readings for Sunday Mass are on a three year cycle, labeled A, B, and C. This year in the Church is an A year, thus most of the Gospel readings come from Matthew (Year B is the Gospel of Mark and chapter 6 from John; Year C we read the Gospel of Luke). That is why our readings in recent weeks and in the near future are from Matthew.

The Region of Tyre and Sidon where today’s Gospel occurs, was many miles north of Bethlehem, about as far north as Jesus ever traveled. They were part of what was known as Canaan, which today would be in Lebanon. A woman of that area, a Canaanite and a Gentile, approaches Jesus for help and mercy. What Jesus does and how He responds to her is indicative of His feelings toward and His approach to Gentiles. She appeals to Him for mercy with the most basic prayer we can offer in some ways, “Lord, help me.” A key part of our faith and an important aspect of stewardship is coming to the conclusion that we need Jesus’ help in many ways. This woman knows that and turns completely to the Lord.

Of course, His response is simple: “O woman, great is your faith! Let it be done for you as you wish.” That is a challenge to us relating to our own faith. Is our faith in fact in God or do we rely on other things to make us feel confident? We are called as Disciples of Christ to put our total faith in the Lord. That is the combined message of today’s readings — we are Gentiles, and it is only through the Lord that we can be saved, and we will be saved.