August 6, 2017 — Feast of the Transfiguration of the Lord 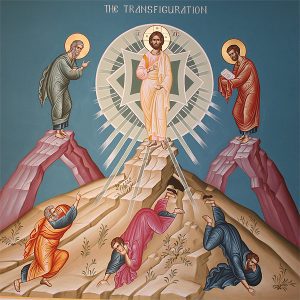 The Book of Daniel, from which our First Reading is drawn, was written some two centuries before the birth of Christ. This is only significant in that many of the prophets (Daniel is considered one of the major prophets) lived as many as six centuries before Christ. However, regardless the timeline, we need to be moved by and appreciative of the prophecies we find in the Old Testament. In the particular passage in today’s reading it states, “The one like a Son of Man received dominion, glory, and kingship.”

We have referenced this fact previously. In fact, the term “Son of Man” occurs 85 times in the Gospels, and in 83 of them it is Jesus who uses the term. (It appears 32 times in Matthew; 15 times in Mark; 26 times in Luke; and 12 times in John, and it is in John where it is used twice by someone other than Jesus.)

The important point for us is that Jesus calling Himself the Son of Man explains that He was born of a woman, and He shares in our earthly conditions and sufferings. That fact should make us want to embrace Him as our Savior, our Friend, and our Shepherd even more.