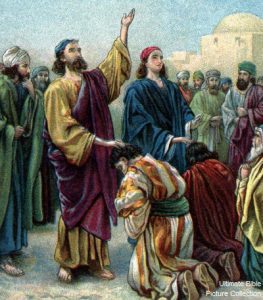 Holy Scripture, the Word of God, is filled with so much meaning for us each and every week, if we only listen carefully and absorb what we are being told. In the last verse of today’s First Reading we hear, “Then they laid hands on them, and they received the Holy Spirit.” It is speaking of Sts. Peter and John who traveled to Samaria to more or less confirm those who had been baptized there.

When the priest or Bishop imposes hands, it is called epiclesis, a Greek word that means “invocation.” The “laying on of hands” is an important part of the ordination of priests and deacons. St. Paul reminded us all in his First Letter to Timothy, “Do not neglect the gift you have, which was conferred on you through the prophetic word with the imposition of hands.”