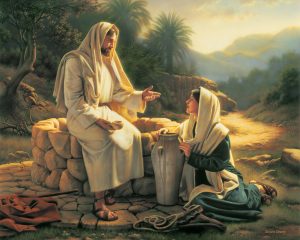 In today’s Gospel Reading from John, we hear the story of the Samaritan woman whom Jesus confronts at the well. Jesus and His Apostles are traveling from Jerusalem in the south to Galilee in the north. The quickest route, although inconvenient in some ways, was through Samaria. Jesus’ followers went to the nearby village of Sychar to procure food while He sat tired and thirsty by what is called Jacob’s Well.

It was about noon, the hottest part of the day, and a Samaritan woman came to the well to draw water. Jesus breaks three Jewish customs in His exchange with the woman. First, He spoke to a woman, something forbidden to men with strange women; second, she was a Samaritan woman, a group with whom Jews did not normally mix; third, He asked her to give Him a cup of water, which would have made Him ceremonially unclean from using her cup or jar. The woman was rightfully shocked.

However, Jesus told her that He could give her “living water.” At that time some spring water was carbonated and it seemed “alive” as it bubbled up from the ground, so it was called “living water.” Jesus meant that the water He offered was alive in a different way because it could both give life and quench spiritual thirst.

Although the whole situation is amazing to the woman, she is particularly struck by how much Jesus knows about her. She reports to her fellow Samaritans “He told me everything I ever did.” That is not what she found so surprising though. What truly astonished her was that in spite of that knowledge, Jesus still loved her. Jesus loves us as well, despite our many shortcomings and sins.