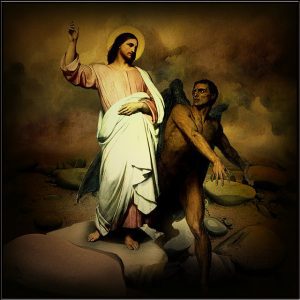 One of the great Catholic philosophers in the past century was Father Thomas Merton. In fact, he was one of four Americans acknowledged by Pope Francis when the Holy Father spoke to the U.S. Congress on his visit to the United States. Pope Francis said this about Merton: “He was above all a man of prayer, a thinker who challenged the certitudes of his time and opened new horizons for souls and for the Church. He was also a man of dialogue, a promoter of peace between peoples and religions.” One of Merton’s favorite topics was temptation that is at the heart of our readings on this First Sunday of Lent. Merton said, “The greatest temptations are not those that solicit our consent to obvious sin, but those that offer us great evils masking as the greatest goods.”

There is no question that temptation is a challenge and has been since the beginning of time. Our First Reading from the Book of Genesis recounts Adam and Eve and their encounter with temptation. Most of us are well aware of what happened in the Garden of Eden, how Adam yielded to the temptation of eating from the Tree of Knowledge that God had forbidden. However, sometimes we miss the fact that there were two trees in the Garden — a Tree of Life and a Tree of Knowledge. The Tree of Life was for the gaining of eternal life, but the Tree of Knowledge would allow the person who partook of it to understand good and evil. We may acknowledge that we know what sin is, that we are aware of what the difference between good and bad is, but that does not lessen the temptation for us to experience it.

We suffer from the same weaknesses as Adam and Eve did. We want to know and we want to challenge God, and we may do it by doing things we know full well are abhorrent to the Lord. Genesis tells us that “then the eyes of both were opened.” Many experiences may open our own eyes, but the important factor is how we respond to that, how we act as a result. Stewardship is a positive way of living. Do we live positively or do we live negatively?

You cannot read or study the writings of St. Paul without coming to the realization that he took the Old Testament quite literally. For him Genesis was historically true. He felt that Adam and Eve were real and that what they did had a lasting effect on all of us. For the Apostle Paul the concepts of sin and temptation as presented in Genesis were closely related to salvation.

Were you aware that the name “Adam” means “humanity?” Adam represents us all. In a sense both Adam and Jesus are kings in their own right. However, under Adam, death reigned, but under Jesus we can find life. St. Paul writes about two men (“Through one man sin entered the world.”) However, our hope and the only answer we have to inevitable sin is the Second Man, Christ Himself. “…how much more did the grace of God and the gracious gift of the one man Jesus Christ overflow for the many?”

It is through the Lord that we find and have hope during this Lenten season. It is by embracing the graces and the righteousness He offers us that we can better resist sin, better refuse to give in to temptation. Truly, “Our strength is in the Lord.”

The Gospel Reading from St. Matthew sets the stage for our entire Lenten journey. Jesus is led, not by the devil, but by the Spirit, into the desert. He is there for 40 days and 40 nights, the same length of time as our period of Lent. His temptations, however, come from the devil, just as ours do.

We must recognize the temptations offered to Him. The first might be termed an appeal to the flesh. Jesus was hungry, and the tempter said to Him, “If you are the Son of God, command that these stones become loaves of bread.” Jesus answers, “Man shall not live by bread alone.” This is a temptation to use God’s gifts for selfish reasons. Do we do that? Is that part of our personal sin? That is certainly something we need to address during this Lenten season.

Again the Lord defies Satan. For us to do that means we need Christ’s help. That is what Lent is about — seeking that help and allowing it to happen.