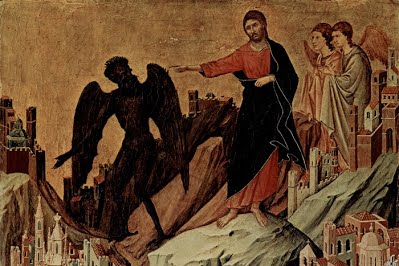 On this First Sunday of Lent, it seems appropriate that all the readings reflect in some way on the issue of temptation. We are familiar with perhaps the most common prayer, the Our Father, in which we ask God to “lead us not into temptation.”

In the Catechism of the Catholic Church, it is interesting to note that #2846 tells us “It is difficult to translate the Greek verb used for ‘lead us’ into a single English word. The original Greek word means both ‘do not allow us to enter into temptation’ and ‘do not let us yield to temptation.’ Sins come from consenting to temptation.”

For our Lenten missions, the issue of “temptation” would seem to have numerous facets which should influence us. Clearly we need to pray, and often, for God’s help as we try to avoid sin, and attempt to change our lives during this time. Also, we must consider the importance of recognizing and confessing our sins in the Sacrament of Reconciliation. These should be part of our Lenten plans; living lives of stewardship might help us continue these efforts beyond Lent and throughout our lives.

Archbishop Fulton Sheen, the late and great Catholic Evangelist and television personality, devoted entire programs to temptation. On one, as he considered Lent a time to seek truth as an endeavor to resist temptation, he said, “It is easy to find truth; it is hard to face it; and harder still to follow it.”