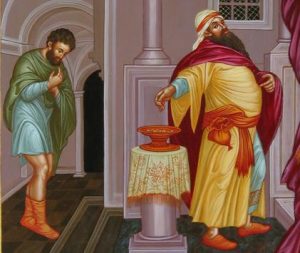 One of the most repeated, quoted, and well known lines from Holy Scripture appears in today’s Second Reading from St. Paul’s Second Letter to Timothy. Paul writes, “I have competed well; I have finished the race; I have kept the faith.” Paul had the ability to put things in terms that all can understand, and that is certainly one of those brief statements that falls into that category. In addition to that message in today’s readings, it is made clear to us in the First Reading and the Gospel that God loves us all always. Keeping the faith under those circumstances should be easier for us.

The First Reading is derived from the Book of Sirach in the Old Testament. This book has gone through various names through the centuries, one of the longer and more endearing being the Book of the All-Virtuous Wisdom of Joshua ben Sira. Scholars estimate that it was written about 200 years before the birth of Christ. It is interesting in that it was written in Hebrew originally, but then was translated into Greek by the author’s grandson. Portions of that Hebrew version were found among the Dead Sea Scrolls.

The proposition in today’s reading can basically be found in the opening sentence that declares, “The Lord is a God of justice, who knows no favorites.” This will be echoed in the Gospel Reading for today also. This reading continues to point out that “The one who serves God willingly is heard.” Obviously, the key for us is to serve God. That is what it means to be a disciple. That is what it means to strive for holiness as a good steward of the gifts we have received.

St. Paul understood as much as anyone that he had been gifted and blessed by God. This Second Letter to Timothy is believed to be the final letter Paul wrote. That is why he is looking at the inevitability of his nearing martyrdom, and perhaps philosophizing about his life. In part he is telling Timothy that he (Paul) may soon be gone, and telling him he (Timothy) must carry on. Paul is saying the same thing to us through Holy Scripture. Paul says, “The crown of righteousness awaits me.” In Greek there are two words for “crown”—one referring to a royal crown and the other to a crown of victory. In this instance Paul uses the Greek stephanos that means the crown of victory.

Paul concurs with Sirach from the First Reading that this crown is available to all; that God will award it to anyone who remains faithful and lives out their life as a true disciple of the Lord. Paul has been criticized by some as speaking too much about rewards, but that is the result of a righteous life. We will be rewarded, and we must never lose sight of that fact as we sacrifice and share and live our lives as best we can.

We have been hearing a succession of parables proclaimed in the Gospel from Luke over the past few weeks. The popular title of this week’s parable is the Parable of the Pharisee and the Tax Collector. We all understand what a tax collector is, but a Pharisee is more difficult to define, even though Jesus makes reference to them often. The Pharisees were more religious than political; however, they tended to be represented by comfortable middle class men. Their weakness was reducing relationships with God to being more ritualistic than real. It is as if in this Gospel Reading, Jesus might be saying what we have heard in the first two readings: God views all equally, but it is important to be genuine and honest and righteous in our relationship with the Lord and our dealings with others.

Jesus reiterates that God can see us all exactly the way we are. Whether we are wealthy or poor, learned or not, God looks into our hearts. That is why Jesus reminds us “Whoever exalts himself will be humbled, and the one who humbles himself will be exalted.” Humility, the understanding that God and those around us are more important than we are, is a key aspect of stewardship.