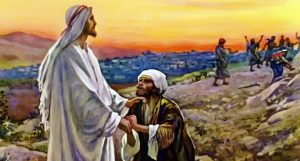 One of the most popular sayings in relation to stewardship is that Stewardship is based on having an “Attitude of Gratitude.” The readings on this 28th Sunday in Ordinary Time all address this issue of gratitude in some way. The Gospel in particular takes a look at what gratitude means to our faith lives. However, in each reading there is a different perspective of what it means to be truly grateful to God.

Our Old Testament Reading, the First Reading, from the Second Book of Kings tells the story of the healing of Naaman. Naaman was the commander of Syria’s army, but he suffered from leprosy. He appealed to the prophet Elisha for help and healing, and although Naaman was a proud man, perhaps too proud, and initially balked because he did not feel that Elisha had treated him with proper respect, he finally did what Elisha commanded, which was to wash in the Jordan River seven times.

You might say that each time Naaman entered the river, he took another step on his faith journey until finally he was, as Elisha had said, completely healed. Naaman naturally felt great gratitude, but he makes it clear that he understands that his gratitude is to God, not to Elisha. It is the Lord Who heals. Our gratitude needs to be to God; Naaman declares, “Now I know that there is no God in all the earth, except in Israel.” It is this acceptance of God’s power and gifts to which we are all called.

The Second Reading from St. Paul’s Second Letter to Timothy also conveys Paul’s gratitude to God, and his expression to Timothy to feel that same sense of thanksgiving. The reading closes with Paul’s statement, “If we are unfaithful, he (God) remains faithful, for he cannot deny himself.”

St. Paul writes, “I am suffering, even to the point of chains, like a criminal. But the word of God is not chained.” At the moment he was writing this letter, St. Paul was indeed imprisoned and chained in Rome. In fact, his death as a martyr was near. Nevertheless, Paul never hesitated in his love and gratitude toward the Lord. As Paul said, they could chain him, but they could never chain the Word of God. God empowers us and it is for this that we are ultimately grateful. We may waver; we may fail to be ever thankful, but God is always faithful to us. That is a realization to which we must come.

Although the Gospel Reading from St. Luke is not very long, it bears within it a strong stewardship message about gratitude for us. Jesus heals 10 lepers, and they are assuredly overjoyed and most likely grateful, but yet, only one stops and goes back to thank the Lord. God does take notice of our attitudes, especially if we have that “attitude of gratitude.” After the man returns to sincerely thank Him, the Lord says, “Ten were cleansed, were they not? Where are the other nine? Has none but this foreigner (the man who thanked Jesus was a Samaritan) returned to give thanks to God?”

Are we included among the nine who received an incredible gift from God, but failed to acknowledge it or to thank Him? Or are we on a constant and consistent basis offering our thanks to God by how we use our time, our talents, and our treasure as good stewards? The man who thanked God was healed in a special way, not just physically, but spiritually as well. We, too, can feel that healing if we live lives of gratitude.