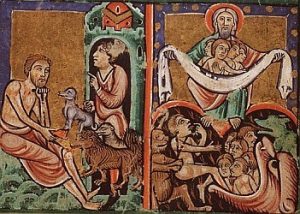 As we have indicated many times, the theme of what constitutes “true wealth” is one that not only runs through the entire Bible, it is perhaps one of the most dominant teachings of Jesus. The readings on this Twenty-Sixth Sunday in Ordinary Time all bear this message.

For the First Reading we return to the Old Testament Book of Amos. Just reviewing the language used by Amos in this prophecy it is clear that people often do not understand or live with a complete understanding of what wealth and comfort truly are. Amos points out that God warns us of more than wallowing in luxuries; he quotes God as saying, “Woe to the complacent.” This indicates an even greater threat to our pursuit of holiness.

The eminent author, philosopher, and Christian apologist C.S. Lewis wrote, “Indifference is the main enemy of love, not hatred.” Do we really care about those around us? If we do not, from the heart, we cannot be the disciples and loving stewards Jesus wants us to be. This is the complacency about which Amos is speaking. It is as if we hide and conceal our own sins, and thus conclude that God cannot see them either. God is aware, and we need to be alert and aware, to guard against apathy, indifference, and complacency.

The Second Reading is again from St. Paul’s First Letter to Timothy. We need to appreciate that most of Paul’s letters were written to faith communities (e.g., Ephesians, Colossians, Romans, Corinthians, and so on). However, a few including the letters to Timothy were written to individuals, in reality to pastors and particular leaders (the two letters to Timothy and the letter to Titus). Our word “pastor” is rooted in the Latin word pastores, which meant “shepherd.” These are instructions to shepherds.

Of course, the significance for us is that Jesus expects each of us to be a shepherd. That, too, is what being a disciple of His is all about. We may not be the formal shepherd like a priest or Jesus, but we hold the same responsibilities to shepherd those we love and those with whom we come in contact. St. Paul opens today’s reading by saying (addressed to all men and women of God, including each of us), “But you, man of God, pursue righteousness, devotion, faith, love, patience, and gentleness. Compete well for the faith.” Paul very much grasped and employed this idea of competing to describe how we were to live and to teach others.

If you are constantly “competing,” it is difficult to be complacent. In fact, to pursue those things that Paul outlines and mentions we must be active, not passive, involved and caring, not complacent and indifferent. Being a disciple entails action. Stewardship means action, not just sharing, but sharing openly and actively.

Our Gospel Reading from St. Luke is basically called the Parable of Lazarus and the Rich Man. Then again it is much more than a parable. It is a story, but a story that might be considered a prophecy. Jesus is trying to emphasize to us what it means and what happens if we are indifferent and complacent. The Lord never condemns the rich man for his wealth, but He does condemn him for not caring, for ignoring and neglecting those in need around him, in this case poor Lazarus. There is nothing subtle when Jesus portrays Lazarus as being rewarded and in heaven, but the rich man in torment and suffering in the “netherworld.” Netherworld is another name for the underworld, for Hades — the opposite of Heaven.

Jesus through Luke shows that people who are not in Heaven may be aware of those who are. Yet there is a vast chasm between them. Again C.S. Lewis addressed these two worlds in his book The Great Divorce. A quote from that book is as follows: “There are only two kinds of people in the end: those who say to God ‘Thy will be done’ and those to whom God says ‘Thy will be done.’ All that are in Hell (the netherworld) choose it. Without that self-choice there could be no Hell. Those who seek find. For those who knock it is opened.”

We have a choice, just as those highlighted in today’s readings. We can be satisfied and choose to remain ignorant and removed from the needs around us, or we can love as Jesus wishes, follow Him, and be disciples.