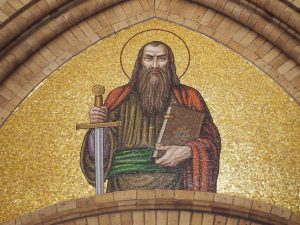 In our Second Reading from the letter to the Hebrews, the writer says, “…persevere in running the race that lies before us while keeping our eyes fixed on Jesus.” The author of the letter to the Hebrews has traditionally been considered to be St. Paul, although many scholars question that. However, the quote cited certainly sounds like Paul, doesn’t it?

There are three elements in it that more or less jump out at you. The reference to life being a race is similar to other thoughts expressed by St. Paul (“I have run the good race; I have kept the faith”). In addition, there are two key words which also are themes Paul often expressed. Those are found in the word “persevere” and in the phrase “while keeping our eyes fixed on Jesus.” Paul often points to perseverance as a necessary approach to being a good and consistent Christian. And he also tells us over and over that we must keep our eyes and hopes and motivations on something above, on Jesus.

It is easy to look at life as a race. In doing that nonetheless, we all understand that we are not speaking of a sprint, but of a marathon. In Greek the word used which we translate as “persevere” is hupomone which also might be translated as “endure.” God has set a race before us. God wants us to run that race and He wants us to finish it correctly. To do that requires endurance, the willingness to continue and to seek holiness as good stewards, because our focus is on what is to come, not what is.