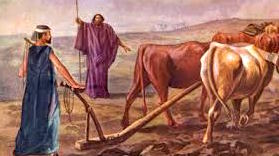 The readings on this Thirteenth Sunday in Ordinary Time speak to the challenges, the possible sacrifices, and the attitudes needed to follow Christ as His disciple. Each of us through Baptism is called to be the Lord’s Disciple, and many of us intellectually understand that. However, making the commitment necessary to fulfill that goal can be difficult in today’s world.

We find Elijah in the First Reading from First Kings. To put Elijah’s situation in context he has been called by God and he, Elijah, has responded. Nevertheless, he is lonely and feels somewhat burdened by the tasks at hand. God announces that He will provide him relief by having him recruit a companion and a successor to his ministry. God says, “You shall anoint Elisha, son of Shaphat of Abelmeholah, as prophet to succeed you.”

Elijah discovers Elisha plowing with “twelve yoke of oxen.” Clearly Elisha was a man of means; any farmer who could afford twelve oxen to assist him with his work was well off indeed. Elisha responds to the call by saying, “…let me kiss my father and mother goodbye and I will follow you.” He does not reject the invitation, but he places some qualifications on it. God invites us to take up His Cross, to take up our own crosses, and follow him. It is natural for us to inwardly think to ourselves that we will as soon as we are ready, as soon as we have accomplished other things. When Jesus called His Apostles, they literally gave everything up and followed Him. We may not have to make that heavy a sacrifice, but we do have to be prepared to change and to adjust to being a disciple.

In St. Paul’s letter to the Galatians, our Second Reading, Paul again addresses the whole issue of Jewish Law. It is a common theme in Paul’s letters, and it is complicated for most of us, who have no Jewish tradition, to understand Paul’s continued mention and evaluation of it. However, it might be simplified in this way. The Jewish Law was exterior — that is, it was a standard of living that required the person following it to act in a particular way in terms of what people saw and perceived.

As Paul is converted to following Jesus Christ, Paul realizes that following the Lord is perhaps more of an internal experience and activity than an external one. Paul’s basic point is that we must internalize the Lord; we must make His presence and His teachings a part of our very being internally. The external actions, as exemplified by the Law, are secondary, if not completely non factors. Paul realized that salvation is not found by fulfilling the external commitment to the Law, but by becoming committed to the internal action of belief and faith and service and love.

Stewardship requires action, but prior to acts of stewardship, one must be converted in both mind and heart, and that is internal. Our Gospel Reading from Luke finds Jesus in a Samaritan village. That in itself is unique and unusual. We have commented in the past about the conflicts between the Samaritans and the Jews, and Jesus and His followers were indeed Jews. They might expect no hospitality from the Samaritans.

What Jesus says and does very well reflects the lesson provided in the First Reading about Elijah and Elisha. The Lord’s final comment after people indicate to Him that they will follow Him, but they have to take care of some earthly matters first, is “No one who sets a hand to the plow and looks to what was left behind is fit for the kingdom of God.” Jesus grew up in an agrarian society. This reading may have meant more to people 100 years ago than it does now as our own society was largely agricultural then.

There are two conclusions to be drawn from Jesus’ statement about plowing and the Kingdom of God: first, the focus has to be forward always, never backwards; second, whoever is guiding the animals (or even the tractor today) must have a firm and consistent grip on the reins or the steering wheel. For us to be disciples and for us to be successful servants of God, like the plower, we must look forward to Christ and to eternity; then we must be committed and seek the strength to follow through with the commitment and the stewardship it requires to accomplish our goal.