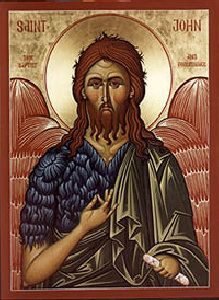 Today, John the Baptist might be considered a political discontent. He was unhappy and openly opposed the rulers of the time. He was, of course, a harbinger of Jesus, and did much to anticipate the coming of the Messiah. However, because he was political in nature to a large degree, people expected Jesus to be equally political. That is why many thought Jesus would lead a revolution that would liberate them — that Jesus would become their new political king.

We know, of course, that Jesus, too, was a revolutionary, but not the kind people expected. The Lord’s revolution was to be accomplished through love and service. That is a concept that is a challenge for us in a society where politics is so public and sometimes so noisy and angry.

Our First Reading is from the Book of Zechariah. Of the prophets in the Old Testament, Zechariah is one of the most specific in term of identifying the time in that he was writing; his writings are clearly stated as having been written between 518-520 B.C., more than 500 years before the birth of Christ. The name “Zechariah” means, “God remembered.” Today’s reading includes two remarkable references and prophecies. Zechariah makes reference to “him whom they have pierced,” a clear and direct reference to Christ, and he also refers to a “fountain to purify from sin.” The connection to Baptism and thus to John the Baptist is quite obvious. It is only through God’s fountain that we can be cleansed.

St. Paul continues the image of Baptism in his letter to the Galatians, our Second Reading. Paul says, “For all of you who were baptized into Christ have clothed yourselves with Christ.” We tend to think of Baptism as being cleansed of sin, but it goes much deeper than that. The Catechism of the Catholic Church (#1213) describes Holy Baptism in this way: “It is the basis of the whole Christian life, the gateway to life in the Spirit, and the door that gives access to the other sacraments. Through Baptism we are freed from sins and reborn as the children of God; we become members of Christ; we are incorporated into the Church and made sharers of her mission.”

There is more than cleansing here. We are also “members of Christ” as well as being “incorporated into the Church and made sharers of her mission.” Is that not what being a disciple of Christ is all about? Is that not a description of what is expected of us as stewards of our gifts, as stewards of the Church? It is in and through Christ that we find our identity. It is finding that identity that allows us to practice stewardship and to be the disciples the Lord wants us to be.

We must view the Gospel from Luke in context. This Gospel passage is immediately after Jesus has fed the multitude. As was His custom, the Lord went off to be alone and to pray. His Apostles were with Him, however, and He suddenly poses the question to them, “Who do the crowds say that I am?” We must keep in mind that they have just witnessed an incredible miracle. Nevertheless, they do share what they have heard from John the Baptist to Elijah (the prophet). Peter is known for not always saying the correct thing, but in this case he is completely accurate: “The Christ of God.”

Jesus probably wanted to hear this answer, as He wanted His Apostles to understand Who He was. But He also wanted them to know what He must do, and throughout this part of the Bible He is preparing them for that — for His crucifixion and resurrection. At the same time, the Lord knows the people are not ready for this — that they could not possibly understand it — so He asks the Apostles not to share what they have come to know.

Jesus’ closing remarks are important to us. He reminds us we must follow Him, and “take up the cross daily.” Carrying a cross in those days was a sign of death; it was a one-way street. What He is trying to get the Apostles and us to understand is that it is necessary. Just as St. Paul made reference to the fact that we must be “reborn” through Baptism and faith, Jesus is making the same point. We need change; we need conversion. Everything we do needs to put us in a position to emulate Jesus, to be willing to make sacrifices to be disciples.