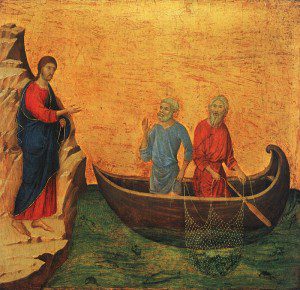 There is much to digest (literally) in today’s Gospel Reading from St. John. It reports the third time that Jesus appeared to His Apostles. The Lord appears on the shore of the Sea of Tiberias, which is another name by which the Sea of Galilee is known. It is early in the morning, and Peter and the others had been fishing unsuccessfully, and obviously were near to the shore, but at Jesus’ urging they cast their nets again and caught many fish, which they then brought to shore.

According to the Gospel Jesus had breakfast with them, and then He poses the question to Peter specifically, “Do you love me?” The exchange between the Lord and Peter is carefully narrated, as are Jesus’ responses. However, at the end of the Gospel Reading for today, Jesus says two simple words to Peter, “Follow Me.” Of course, these are the same two words with which we are familiar that Jesus used to call Peter and the others in the beginning.

We need to understand that these instructions from Jesus are not just for the Apostles but for us as well. How have we responded to that call? Our reaction does not have to be as dramatic as Peter’s and the others, who abandoned their lives and their livelihood and became total followers of Christ. However, we, too, need to find the strength and the commitment to follow the Lord. How we carry that out is our stewardship, how we live our lives.