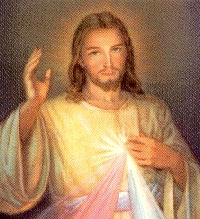 This Sunday, the Sunday of Divine Mercy (or the Second Sunday of Easter), was officially designated by Pope St. John Paul II in 2000 at the Canonization of St. Faustina Kowalska. This is a very special Sunday when Jesus through the Church offers forgiveness of all sins and punishment to those who have gone to confession and who receive the Eucharist on this holy day.

It was just a little more than a year ago that Pope Francis announced his intent for the Jubilee Year of Mercy with these words: “It’s a journey that starts with a spiritual conversion. For this reason I have decided to declare an Extraordinary Jubilee that has the mercy of God at its center. It will be a Holy Year of Mercy.” The “official” announcement of the Year of Mercy, however, occurred on this Divine Mercy Sunday last year.

From the beginning of his time as our Pope, our Holy Father Francis has had “mercy” as an ongoing theme. This Year of Mercy is directed at three groups of people: 1. Each of us as members of the Church; 2. The clergy; 3. Everyone in the world. Today’s celebration should bring all this in focus if it has not already. We are called to look into our own hearts and recognize our need for God’s mercy. Today should be a day of jubilation that God’s mercy is so free and open to us. Mercy, you see, is not earned; it is given unreservedly.

The readings on this Holy Day all reflect that theme of mercy. Our First Reading is drawn from the Acts of the Apostles and it declares the works, the acts that is, of the Apostles in the early days. They go about the countryside performing “signs and wonders.” In effect it declares that “they all were cured,” meaning God’s love and forgiveness is available and open to everyone, absolutely everyone. There is no limit and no restrictions on God’s mercy.

Have you ever heard of an “out of body experience?” This may be what John experienced as reflected in the Second Reading from Revelation. Whatever the circumstances, it was a unique experience for John. Scholars agree that the voice John heard was the voice of Jesus, a voice with which John would have been very familiar. John sees Jesus in all His glory, and he receives instructions from Him to write a book of what he has seen and witnessed. Witness to faith, witness to the Lord, are important parts of a stewardship experience. Each of us, like John, is called to witness.

This is the first time, as recorded in Revelation, that John is commanded by the Lord to write. However, he receives that command eleven more times in this Book. It is difficult to really ascertain exactly what John thought and felt at that moment. John was overcome and in awe. Here was Christ in all His glory! John had spent three years with the Lord while He was among them. John reports that Jesus “touched me with His right hand and said, ‘Do not be afraid’.” This is the God of love, the God of mercy, who comforts in compassion.

The Gospel from the Book of John would seemingly be one of the results of the command to write what John has seen. Much of the attention on this Gospel has been given to Didymus, the Apostle Thomas, and the resulting term “doubting Thomas.” However, the meaning in terms of mercy is much deeper than that. When Jesus appears among the Apostles, the Lord’s first words are “Peace be with you.” These are the words of a forgiving and merciful Father. They may have expected to be scolded for their desertion of Jesus on Good Friday; nevertheless, the Lord comes with words of reconciliation.

Jesus commissions them, just as He has commissioned each of us, to continue His work on earth. The Lord blesses them with the Holy Spirit and breathes new life into them, just as His Father breathed life into all of humankind at the time of creation. He grants them, and thus the Church’s priests and clergy, the authority to forgive. We can be forgiven; God’s mercy extends to each of us.