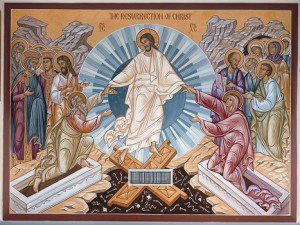 Easter — the holiest day of the year. In fact today marks the third day of what the Church considers the three holiest days of the year — our Sacred Paschal Triduum, when we as Catholics and Christian recall the suffering, death, and resurrection of Jesus.

Christ’s Resurrection is at the foundation of our faith. His rising from the dead establishes Him as the Son of God and proves that God will judge the world in righteousness. Believing and trusting in this means that “death is swallowed up in victory.” On this day we receive a “new birth into living hope through His Resurrection.” We, too, are resurrected today, thus our joy.

Our readings on this holy day all affirm what we believe. The First Reading from the Acts of the Apostles includes a sermon given by St. Peter, a firsthand account of what he witnessed. Peter’s sermon, although not lengthy, summarizes what we need to remember about Jesus on this day: Jesus was baptized and anointed with the Holy Spirit and with that power; He went about doing good, with the power of God with Him; people (including Peter) witnessed these things; He was crucified, but raised from the dead, again in the presence of witnesses; He commanded His followers to preach the message of Who He is and what He did; Jesus is ordained by God and is the one foretold by the prophets as the Messiah.

Perhaps for us as His followers the key is not just understanding these facts about Christ, but also understanding that we, too, are called by Him (actually commanded) to spread the message and to live in a way that shows our Christian beliefs.

St. Paul, in the Second Reading from his letter to the Colossians, makes it clear to us that we share in Christ’s Resurrection. Paul says in effect that Jesus left the tomb, and we should as well. Jesus spent His time after Resurrection ministering to His followers and serving them. We are expected to do the same — live with one another and serve one another. That is, of course, at the very core of our stewardship philosophy. We are gifted, and we need to use our gifts to serve our community, one another. That is part of being resurrected according to Paul.

Reminding us also that Jesus looked to Heaven, recognizing that was His true home, St. Paul tells us to do the same: “Think of what is above, not of what is on earth.”

Our Gospel Reading on this holiest of days is St. John’s account of what occurred on Easter Sunday, the discovery of the resurrected Jesus, of which, he, John was a witness. Along with St. Peter St. John rushes to the empty tomb. When John looks into the tomb, he “saw and believed.” In the original Greek in which this Gospel was written, St. John uses the Greek word eido for what is translated as “he saw.” This has a much deeper meaning than just seeing; it actually means “to understand and to perceive the significance” of something. John understood, and we need to understand in hearing it.

As the Apostles met and visited with Jesus, and then began to preach about His Resurrection, they never really emphasized the empty tomb. They stressed His Resurrection and His Saving Grace. That is what we celebrate today, not that the tomb is empty, but that we are fulfilled, and filled with hope.