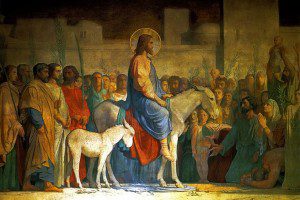 Today is the Palm Sunday of the Lord’s Passion, sometimes referred to more simply as Passion Sunday. The readings today prepare us for Holy Week which officially begins today. The Gospel in particular is always the proclamation of the Passion of Christ. It is lengthy and filled with meaning for us.

The report of Christ’s passion is included in all four Gospels. Although there are some minor differences among them, they seem to agree with each other on the major facts, and certainly the four together offer us an accurate depiction of what occurred. The Gospel reading today is the narrative from Luke, which emphasizes Christ’s innocence.

Rather than make an effort for an overall reflection, we choose to focus on two important components of today’s readings — humility and obedience. We have referenced these in the past as significant in relationship to stewardship as a way of life.

The Prophet Isaiah, in an almost strikingly tragic way, foretells the sufferings of Christ when Isaiah has the Messiah say, “I gave my back to those who beat me, my cheeks to those who plucked my beard; my face I did not shield from buffets and spitting.” Jesus understood full well the suffering and pain and death He would experience in our behalf. His response and His message to us has everything to do with humility, however. Jesus accepts the fact that He is the servant of the Lord, something that our own pride and sense of independence may prevent us from accepting.

In his letter to the Philippians, St. Paul emphasizes this obedience and humility, as well. Paul reminds us that Jesus “emptied himself, taking the form of a slave, coming in human likeness; and found human in appearance, he humbled himself, becoming obedient to the point of death.” Jesus’ humility is a part of His life on earth from the time He was born in the humble setting in the stable. He was humble in that He was born as a helpless baby. He was humble in obedience to His parents and to His Father in Heaven. And, of course, He suffers the ultimate in humility in His suffering and death on the cross.

All of the obedience and humility concludes with what we call the Passion of Christ: the time period from the night prior to the Crucifixion of Jesus until His death on the cross, which includes His time in the Garden of Gethsemane, His prayers, His betrayal by Judas Iscariot, His abandonment by and denial by His disciples, His arrest, His trials, His beatings, and His Crucifixion itself.

Even though this is history for us, it is more than history. It is a lesson in life. The humiliation, the persecution, the scourging, the painful and difficult journey up the hill with the cross — all make His suffering, His obedience, and His humility obvious to us. The lesson for us is the humility and forgiveness Christ demonstrates, even toward those who abused Him. He shows us the kind of love He expects from us. The Cross, for all of its sorrow, pain, and despair, is also a sign of freedom and hope. We are called to transform the suffering of this day into infinite love.