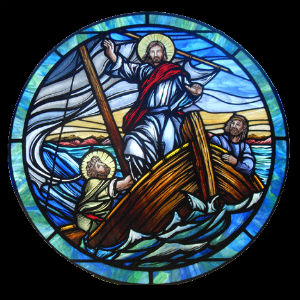 What we know and understand as Church more or less begins with today’s Gospel reading from St. Luke. Jesus calls His first disciples — His first Apostles. Luke tells us of the miracle that occurred for St. Peter and the others in their fishing boat. At the Lord’s command, they cast their nets after a time of catching nothing, and “they caught a great number of fish.”

Note Peter’s reaction, however. He falls to his knees and implores Jesus, “Depart from me Lord, for I am sinful man.” St. Peter is astonished and amazed, and he is, quite frankly, afraid of what he has just experienced. We may sometimes react to the Lord’s calling in a similar way. It is a bit overwhelming and frightening to come to the realization that we, too, are called, and that the Lord has expectations of us.

Yet, this is how what we know as the Church began. It commenced with Jesus calling simple fishermen according to our Gospel. These, of course, then developed into twelve, then hundreds, then thousands, and now millions upon millions of those called to be disciples. We are among that throng. When Luke speaks of “following,” he is talking about discipleship. We are called to be stewards and disciples, but are we willing to “leave everything and follow Him?”