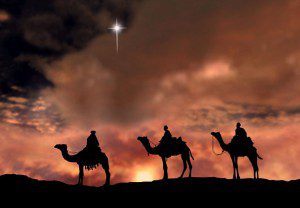 Epiphany Sunday is always a joyous time in the Church. The story of the Magi as recorded in the Gospel of Matthew is one with which we usually become familiar when we are young. This day is filled with symbolism; it is filled with stewardship.

The prophet Isaiah perhaps more than any other of the prophets anticipated the coming of Christ. He foresaw details about the coming of the Messiah which are uncanny in their accuracy. It is almost as if Isaiah foresaw the glory of Christ’s Epiphany. “Rise up in splendor…Your light has come…Then shall you be radiant at what you see.” The light of Christ has shone and is shining upon us. However, we are to do more than just bask in it. We are to be “radiant at what we see.” This is the call to stewardship; we are to take that light, that Good News, and we are to share it and spread it.

Biblical scholars are of the opinion that St. Paul wrote his letter to the Ephesians (from which our Second Reading is drawn) during a time when he was under house arrest in Rome. Note that he was not in prison. At that time “house arrest” meant you could move easily around your house during the day under the watchful eyes of soldiers, but could not leave. At night you were chained to a soldier who slept next to you.

Paul speaks of being a steward of God’s grace. You might say he realizes that he is not a prisoner of the Romans, but a “prisoner” of the Lord. He has felt and realized the light of Christ referenced by Isaiah, and he has spent his apostolic life as a disciple, as one who has indeed been a steward and shared the glory he has realized.

The Apostle Luke provided us with a detailed accounting of Christ’s birth in Bethlehem. The visit of the Magi would seem to have occurred some time, perhaps even months, after the Lord’s nativity. Their trek and visit is only mentioned in the Gospel of Matthew. Much has been written and surmised in relation to who they were, and the significance of their journey and visit.

For us as stewards it is well to take note of two important aspects of this story. When Jesus was born, it was first revealed to humble and plain shepherds. The revelation for those considered more honorable and learned, namely, the Magi, occurred much later. Another perspective is that Jesus came to the poor first, and then the rich. The point is that He came and comes to everyone, each one of us as well.

An “Epiphany” is, as normally used, a revelation. The revelation in this case, for us, and for the Magi, is the realization not only of the divinity of the Lord, but also the fact that Jesus came as the Savior of all. Those first shepherds who approached and worshiped Jesus were Jews; these Magi were gentiles. We need to respond to this revelation, just as the Magi did.

They could have merely admired the glorious star which they saw in the sky and philosophized as to what it was and what it meant. However, they did more than that. They acted. We, too, are called to act through stewardship. We are called to more than just follow the Light of Christ. We are called to respond and to act and to do something to show that we are indeed disciples. That would make us, too, wise.