November 22, 2015 — The Solemnity of Our Lord Jesus Christ, King of the Universe 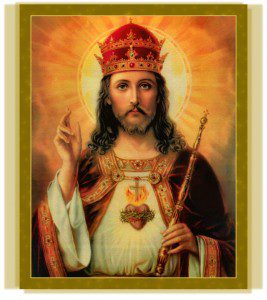 Today we celebrate the Solemnity of Our Lord Jesus Christ, King of the Universe, better known to most of us as Christ the King. As you are aware, things in the Church sometimes take time, and this particular celebration is not very old when we consider the time that has passed since Christ established the Church, more or less on Pentecost Sunday, which we celebrated last May. It was Pope Pius XI who established this festival in 1925, a mere 90 years ago.

In his encyclical, in which he decreed this feast, Pope Pius XI stated, “It has long been a common custom to give Christ the metaphorical title of ‘King,’ because of the high degree of perfection whereby He excels all creatures. So He is said to reign ‘in the hearts of men,’ both by reason of the keenness of His intellect and the extent of His knowledge, and also because He is the very truth.” The Pope goes on to provide other aspects of the Lord that make him a King, citing His inspiration, charity, mercy, kindness, and love. Our readings for this day confirm those traits in Jesus, and explain why He is our King, especially as the Pope said, “in our hearts.”

The Book of Daniel provides us with our First Reading. The name Daniel means “God is judge.” One of the many prophets who was exiled to Babylon after the capture of Jerusalem in 605 B.C., Daniel prophesied the coming of Christ as well as someone he called the “King of Kings.” In today’s reading Daniel refers to Christ as the “Son of Man” twice. What makes this term of interest is that it was what Christ used to describe Himself most often. In fact, Jesus referred to Himself as the Son of Man more than eighty times. However, Daniel also identifies Christ as King, saying, “His dominion is an everlasting dominion…his kingship shall not be destroyed.” There is no time limit on Christ’s dominion; it is permanent.

Our Second Reading is drawn from the Book of Revelation. The author identifies himself as “John,” and the fact that in the Bible this book is the final book in the New Testament, and was written, according to most scholars, in the years 81 to 96 A.D lends some credibility to ascribing it to the Apostle John. Regardless the author, nevertheless, Revelation presents Christ as having come as well as coming again. His Kingship is affirmed. “I am the Alpha and the Omega, says the Lord God, the one who is and who was and who is to come, the almighty.” Alpha is the first letter of the Greek alphabet and omega is the last letter of that alphabet. They symbols A and Ω appear throughout our churches and the Church. They also mean that Jesus is the beginning and the end, as well as everything in between. In the letter to the Hebrews we find the statement, “Jesus Christ is the same yesterday, today, and forever.” (Hebrews 13:8) He is our King, and we need to embrace Him as such.

In our Gospel from Saint John where Pontius Pilate asks Jesus point blank, “Are you the King of the Jews?” to which the Lord eventually replies, “My Kingdom is not of this world.” Pilate was surely perplexed and confused by that answer because Pilate’s perception of what it means to be a King is perhaps similar to many of us. St. Augustine, writing about this Gospel passage, points out that to Pilate who thinks of being a King only in political terms, “…earthly kingdoms are based upon force, pride, the love of human praise, the desire for domination, and self interest.” Jesus is the antithesis of all of these. Yet, we, who are very human, also tend to recognize the kind of power and dominion that Pilate thought of and understood when the word “king” was used.

The heavenly kingdom, as exemplified by Jesus, is based on love, sacrifice, humility, and righteousness. As Advent begins next week, and as we make our own preparations for Jesus’ reign, we need to keep those traits close to our heart, because those are the attributes of a steward, one who strives to serve God and others.