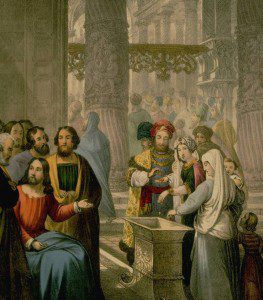 The Gospel from Mark contains one of the most repeated and utilized accounts about what it means to practice stewardship, as well as the requirements that need to be met in order to be a good steward. It is the story of the poor widow who placed “two small coins worth a few cents” into the offering basket. Although we often call this the narrative of the “Widow’s Mite,” we should keep in mind that a “mite” was a medieval English coin, and that term was never used until the Bible was rewritten during the Reformation — “Mite” was first used in the King James version of the Bible.

However, the significance of the story is not what we might call the coins; it is what Jesus was trying to tell us by sharing what happened. The Lord parallels an oft-repeated stewardship saying, “Not equal giving, but equal sacrifice.” It is not the size of our gifts of gratitude to God that matter; it is the idea that each of us as Catholics and Christians makes an equal sacrifice in our efforts to be good stewards.

The Lord tells us, “For they have all contributed from their surplus wealth, but she, from her poverty, has contributed all she had, her whole livelihood.” Although He does not say it specifically, what Jesus is declaring to us is, “She trusts Me.” Do we? Do our sacrifices reflect that trust?