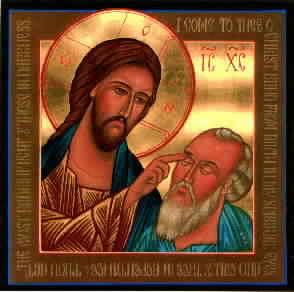 Most of us are accustomed to being called Christians — that is, followers of Christ. However, the Lord’s first followers were not called by that name at all. It was not until many years after His Crucifixion and Resurrection that the term Christian became popularly used. There is a subtle, yet profound reference and statement in today’s Gospel from St. Mark, a reading which presents to us the healing of a blind man.

After Jesus has responded to the blind man’s calls for mercy and healing, and the Lord has told him that it was his faith which had saved him, the Gospel tells us of the former blind man, “Immediately he received his sight and followed him (Jesus) on the way.” What is noteworthy about this is at that time and for the first years after Jesus’ Resurrection, His disciples were called “followers of the way.” They recognized Jesus as the way to live and the way to salvation. (Jesus stated more than once, “I am the way.”)

Thus, the man became not just healed but a follower of the Lord. Jesus healed the man on His way from Jericho to Jerusalem, where He would be crucified. The man most likely was with Him all the way. Would we be willing to follow the Lord on such a journey? That is exactly what He is asking us to do.