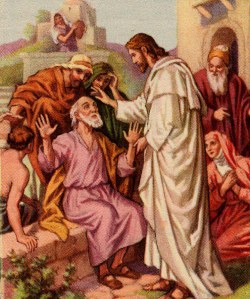 Jesus shows no preference when it comes to those who believe. If you believe, no matter who or what you are, you can be saved. If you do not believe, it does not matter who you are. As is written in our Second Reading from James, we, too, are called to that same kind of attitude: “Brothers and Sisters, show no partiality as you adhere to the faith in our glorious Lord Jesus Christ.”

The Gospel records a remarkable healing of a man who could not hear or speak. Our First Reading from Isaiah refers to similar events when Isaiah, looking to the future of the Kingdom here on earth, states, “Then will the eyes of the blind be opened, the ears of the deaf be cleared; then will the lame leap like a stag; then the tongue of the mute will sing.” Each of our lives is filled with challenges and trials. Isaiah tells us that our strength is in God. When John the Baptist was in prison, he began to doubt (a test each of us faces) and he sent people to pose a question to Jesus. The Lord’s response was “Go and report to John what you have heard and seen: the blind see, the lame walk, the lepers are cleansed, the deaf hear, the dead rise, the poor have the gospel preached to them.” (Matthew 11: 4) Throughout Holy Scripture Jesus tells us and repeats to us the glory of salvation. That is where our trust should lie; that is where we need to find strength; that is our hope.

We must not forget that the age when the letter of James was written was a time filled with prejudice and opinions based upon how one was viewed in terms of class, religion, gender, and nationality. People were constantly classified and judged. We often speak of and think of the early followers of Jesus as being unified. Nevertheless, they battled many of the same attitudes prevalent today and throughout history. Jesus spent his ministry trying to break down the barriers that existed between and among people; the Second Reading from James addresses these same difficulties. James speaks in particular of the rich and the poor and how we judge and view people based upon our perception of their place in society. James indicates that the poor are chosen, and this is an estimation shared by the Lord. The poor have inherited the Kingdom, first of all, because as Jesus indicated, it is easier for them to enter Heaven. In addition, the poor have learned to trust God to a greater extent than others. Thus, their faith may be deeper. We need to find that trust in God in our lives.

The Gospel reading from St. Mark indicates that Jesus and His followers were traveling and arrived in the “region of Decapolis.” Decapolis means “ten cities” in Greek, and it was an area just east of the Sea of Galilee, and a region with which Jesus (who was from the northern end of the Sea and of Galilee) was familiar. The people there were Gentiles, so it is probable that both those who presented the man for healing to the Lord, as well as the man himself, were not Jewish. However, as James states, the Lord shows no partiality. Make no mistake; Jesus knew what He was doing at every moment, and everything He did and said was significant to us and our understanding. Our goal as Catholics and Christians is to answer the Lord’s call to discipleship and stewardship and holiness, and in the process of taking action in response to that summons, we are to minister and serve with no regard to judgment or bias. Loving our neighbor is a command, not a choice, and loving our neighbor indiscriminately is Jesus’ way.