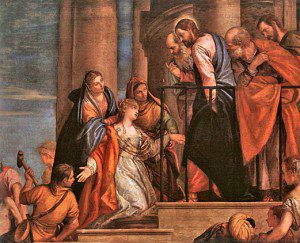 According to Catholic scholars, the Book of Wisdom from the Old Testament was written about 50 years before the coming of Christ. The author, though unknown, wrote in Greek, and presented the Book as if it was written by Solomon. The point of the Book in part is to extol the virtues of seeking divine wisdom. The first ten chapters, including our First Reading today, provide a foundation for the New Testament and the teachings of Jesus.

Jesus was in many ways the ultimate teacher. He is called “Teacher” 29 times in the Gospels. If we include the verb “teach” the references grow to some 90. Just as the Book of Wisdom paints the splendor of seeking wisdom, the Lord imparts wisdom to us constantly. Jesus did not normally give speeches; He talked with people and with us. Today’s readings build upon His teachings in many ways.

The First Reading from the Book of Wisdom explains to us the importance of striving to understand the mysteries of faith while at the same time accepting the fact that understanding is beyond our grasp. You might say there is knowledge, understanding, wisdom, and action. From a stewardship perspective many people know what stewardship is; others understand it and may even be able to articulate it. However, the great challenge is the action, living it out in our daily lives. That demonstrates wisdom.

Like the Lord, St. Paul was a great teacher. His letters make up half of the New Testament. Paul was more often an orator than Jesus, but his abilities to teach and foster the faith are clear. Today’s Second Reading is from his second letter to the Corinthians. Paul’s message has much to do with “giving.” St. Paul does not tell the Corinthians that they “have” to give; that would be taxation, and Paul in his former life was very familiar with that. Instead, like Jesus Himself, Paul makes it clear that people are able to exercise free will in what they give and what they share. The idea of “free will” is a great boon, but it also can be a bit of a burden as well. Whether we are disciples and whether we practice stewardship is a matter of personal choice. Yet Jesus did “command” us to love one another. If we are really pursuing that admonition, it is difficult to do it without being a good steward.

Jesus, that master teacher, was a healer. In last week’s Gospel, He demonstrated His authority over nature by calming the storm. This week He exhibits His authority over sickness and death. He heals a woman of a hemorrhage, and then a young girl is brought back to life. There is an interesting contrast in these two events. The first is done publicly although the woman approaches him in secret, while the second is more or less done privately while the appeal was made publicly. The key to the first act of healing is that the woman reached out to touch Jesus’ cloak. This is more than physical touching; as the Lord indicates what the woman is really doing is reaching out in faith. We can attend church regularly and pray often, but unless we truly reach out in faith, we cannot be healed. St. Augustine once said, “Flesh presses; faith touches.”

Prior to healing and bringing back to life the daughter of the synagogue official, Jesus says to him, “Do not be afraid; just have faith.” For us to find calm in the midst of a storm and for us to find healing in the midst of something which seems too great to overcome, it is our faith, too, which is the solution. Although Jesus may respond to us and to others differently in each situation, it is in reality the same. Jesus can touch each of us personally, but we must ask and seek Him.