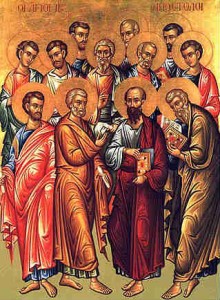 St. Paul tells us in the second reading that “time is short,” and Jesus tells us in the Gospel “This is the time of fulfillment. The Kingdom of God is at hand.” Those urgent messages are just as applicable today as they were at that time. We often become complacent and tend to think that tomorrow we can change; tomorrow we can get our lives in order as Jesus has said we must. On this Third Sunday in Ordinary Time in the first month of the new calendar year we need to examine who and what we are.

In the first reading from the Book of Jonah God calls Jonah to go to Nineveh immediately. Nineveh was a large city, the capital of the Assyrian Empire. Jonah was hesitant, just as we may sometimes be tentative and diffident about heeding the Lord’s call. God wanted to work through Jonah, just as the Lord wishes to work through us. In order to accomplish that we must be open to letting God be an intricate part of our lives. What Jonah did was an example of repentance, an illustration of what can be done when someone allows the strength and power of God to work within her or him.

St. Paul, in his letter to the Corinthians, reinforces the call for change and conversion heard in the first reading. Paul prompts us to recall that time is short, and the world in which we live is temporary. As each of us knows, it is very easy to get caught up in our day to day experiences and emotions. Yet St. Paul declares we may spend too much time weeping, rejoicing, and possessing. Stewardship tells us that everything we have comes from God. The point of that is the same as Paul’s thrust in the second reading — that is, our focus should be on God’s presence in our lives, and the fact that this life is merely a preparation for the next one. It is how we prepare for that next life through change and conversion that is crucial.

Jesus and 11 of the 12 Apostles were Galileans (only Judas was not; he was a Judean). Most of Jesus’ ministry occurred in and around Galilee, so it was natural that His efforts began there. As reported by St. Mark in today’s Gospel, the first words of the Lord’s ministry were, “This is the time of fulfillment. The Kingdom of God is at hand. Repent and believe in the Gospel.” Entire chapters have been written on that message alone. A key word in His message is “Repent.” We may think that He is telling us to feel penitent about how we have lived and acted, but His meaning is much deeper than that. He is calling us to change, in the same way we hear of change and conversion in the first two readings. It has often been said that stewardship involves a change, a conversion of mind and heart. That is what Jesus is trying to say to the people of that time and to us as well.

The Lord follows the call to repent with a call to “believe.” The original Greek word translated as “believe” was pisteuo. As is often the case the implication of that word is much more than just agreeing or embracing. It means trust and the recognition that we are dependent upon God. Again this goes back to one of the central ideas behind lives of stewardship — that we trust completely in God and make Him central in our lives. It is more than just believing in God. As was the case when Jesus called the first Apostles to “come after me,” He is calling us to do the same. With His help and through conversion and change we can accomplish that.